In spite of a gallant effort, Panthers fall to… 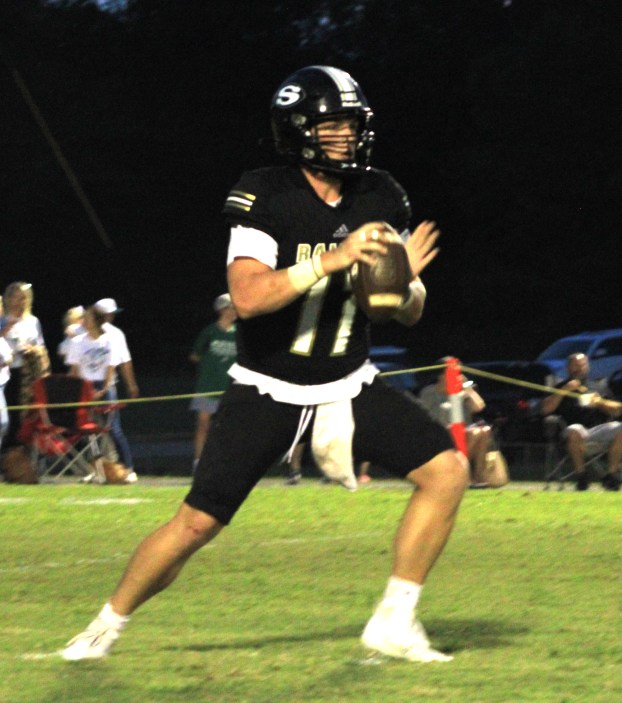 Southland Academy Quarterback Chase Ledger threw for two touchdowns and rushed for three more to lead the Raiders to a 35-7 victory over Edmund Burke Academy. Photo by Kayla Hudgins

WAYNESBORO, GA – Thanks to five fumbles and three interceptions forced by the Raider defense, the Southland Academy Raiders (SAR) were able to take advantage of those turnovers and turn them into points. This would eventually lead to a 35-7 victory for SAR over Edmund Burke Academy (EBA) on Friday, September 24 in Waynesboro, GA.

SAR quarterback Chase Ledger led the Raiders’ offensive attack by throwing two touchdown passes and rushing for three more. Ledger completed seven of nine pass attempts for 101 yards on the night. SAR running back Hudson Collins also scored a touchdown while rushing for 73 yards on nine carries and running Back David Dickens also had a productive night for the Raiders, as he rushed for 54 yards on eight carries.

The Raiders opened the scoring with 9:30 to go in the first quarter by completing a four-play, 61-yard drive with a 42-yard rushing touchdown by Collins. The extra point by Caleb Law was good and the Raiders had a 7-0 lead.

Then with 6:01 left in the first quarter, Ledger completed a seven-play, 60-yard drive by the Raiders with a two-yard rushing touchdown. Law’s extra point was good and SAR had a 14-0 lead.

With 8:01 left before halftime, the Raiders added to their lead by driving 72 yards on eight plays and capping the drive off with a 26-yard touchdown pass from Ledger to senior wide out Buddy Brady. Law’s extra point was good and the Raiders had a commanding 21-0 lead. Then with 1:30 to go before the half, the Raiders struck again when Ledger capped off a 10-play, 43-yard drive with another two-yard rushing touchdown. Law’s extra point was good and SAR led 28-0.

However, the Raiders were still not done and added another touchdown with 28 seconds before halftime when Ledger broke through the EBA defense and scampered 30 yards for his third rushing touchdown of the night. The extra point by Law was good and SAR enjoyed a 35-0 halftime lead.

The main reason for the Raiders being able to score 35 unanswered points in the first half was mostly due to the play of the SAR defense, which forced EBA into committing five fumbles and three interceptions for a total of eight turnovers on the night.

EBA was able to score a touchdown late in the game, but by that time, it was academic, as the Raiders would leave Waynesboro with a 35-7 victory.

Up next for SAR (2-3) is a home contest against Southwest Georgia Academy on Friday, October 1. Kickoff is scheduled for 7:30 p.m.