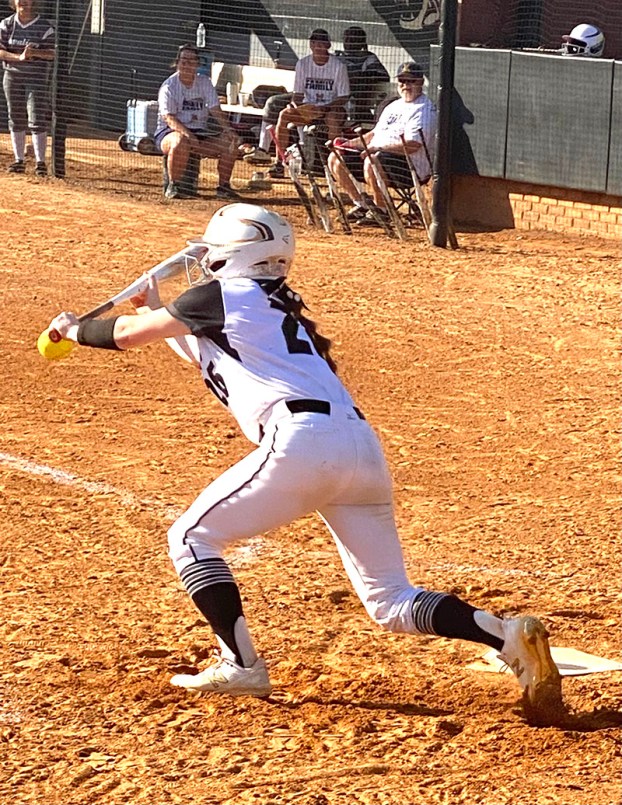 Schley County Senior Centerfielder Maddie Walker went 2 for 3 at the plate and scored a run in the Lady Wildcats’ 6-2 loss at Wilcox County. ATR Archive

ROCHELLE, GA – Trailing Wilcox County 3-0 after the first inning, the Schley County Lady Wildcat Softball Team (SCHS) scored two runs on two hits in the top of the second, but went scoreless the rest of the way and fell to the Lady Patriots 6-2 on Monday, September 13 at Wilcox County High School.

Berkley Goodin and Maddie Walker each went 2 for 3 at the plate and scored a run to lead the SCHS offense. Zoe Molina also had a strong day at the plate for the Lady Wildcats, as she went 2 for 4 with two singles.

In the top of the fifth inning, SCHS trailed 3-2 and had an opportunity to tie or take the lead. With two outs, Makena Wurtz, Zoe Molina and Berkley Goodin each singled to load the bases for Landry Whaley. However, Whaley popped out to shortstop to end the threat.

That fifth inning would be the last true opportunity for the Lady Wildcats to take advantage with runners in scoring position.

In the bottom half of the inning, the Lady Patriots (13-4) doubled their lead when Mayghan Hanner belted a solo home run over the left field wall. Then in the bottom of the sixth, WCHS added two more insurance runs on two hits and took advantage of two SCHS errors to seal the deal.

Wurtz went the entire way in the circle for the Lady Wildcats. She gave up six runs on eight hits, walked one batter and struck out one.

Hanner led the offensive attack for the Lady Patriots by going 2 for 2 with the home run in the bottom of the fifth, along with a double, three RBIs and two runs scored.

The Lady Wildcats (5-6, 2-0) will take the field again on Tuesday, September 14 when they host Marion County in an important GHSA Region 5A-Public contest.  First pitch is scheduled for 5 p.m.