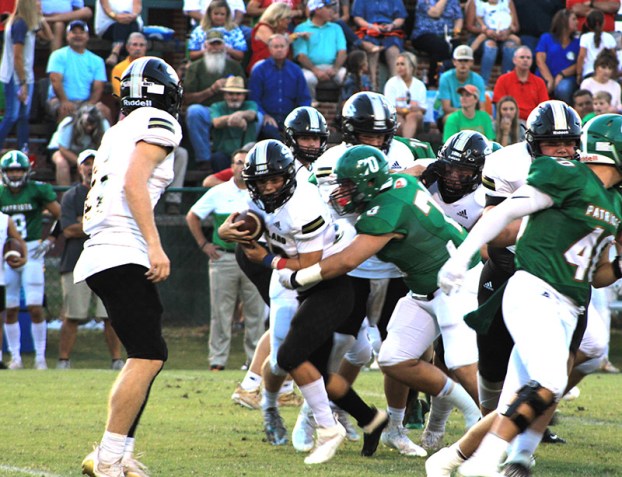 BELLVILLE, GA – After a thrilling victory over their arch rivals Deerfield-Windsor the week before, the Southland Academy Raiders (SAR) were hoping to continue the winning momentum when they made the approximately 170-mile trip east to Bellville, GA to take on the Patriots of Pinewood Christian Academy (PCA).  However, the Raiders committed three turnovers in the contest and struggled to contain PCA’s offense all night.  As a result, the Patriots handed the Raiders a 52-19 loss on Friday, September 10 at Pinewood Christian Academy.

In spite of the loss, SAR Head Coach Rod Murray praised his club for its effort and grit in trying to get back into the game against a quality opponent in PCA.

“We played hard and never gave up,” Murray said. “We kept working on our stuff…. trying to get back into the game, as well as building confidence for us for next week.  Pinewood has a very good team. That didn’t surprise us.   We have to learn from our mistakes and move forward.”

The Raiders had a difficult time containing the rushing and passing attack of PCA quarterback Mic Wasson. Wasson rushed for 214 yards on 17 carries and also did damage through the air, as he connected on 8 of 15 passes for 127 yards and threw three touchdown passes. PCA quarterback Banks Booth also threw two touchdown passes on the night for the Patriots.

PCA scored its first touchdown in the first quarter when Wasson connected with Jade Bradley on a nine-yard touchdown pass. The two-point conversion attempt failed, but the Patriots had an early 6-0 lead. 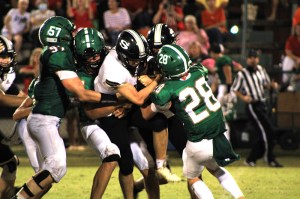 Southland Academy Senior Running Back David Dickens continues to fight for yardage against the Patriots.
Photo by Kayla Hudgins

Then Wasson was on the receiving end of the Patriots’ second touchdown of the game, as he caught a pass from quarterback Banks Booth. This time, PCA’s two-point conversion attempt was successful when Preston Lowe ran the ball into the end zone to give the Patriots a 14-0 lead.

However, the Raiders had a response in the first quarter when quarterback Banks Simmons connected with Hudson Collins for a 52-yard touchdown. The extra point attempt failed, but SAR was back in the game, trailing 14-6.

However, in the second quarter, the Patriots countered with an 82-yard scoring play from Wasson to Kaedon Arnold. PCA decided to go for two and succeeded when Wasson connected with Booth in the end zone to give the Patriots a 22-6 lead.

Later on in the second quarter, the Patriots struck again when Wasson found Walker Todd for a four-yard touchdown pass. The two-point conversion attempt failed, but the Raiders found themselves trailing PCA 28-6 at halftime.

In the third quarter, PCA picked up where it left off. Lowe extended the Patriots’ lead to 34-6 when he scored a rushing touchdown from 10 yards out. The Patriots were able to score their two-point conversion when Wasson found Bradley on a short pass to give PCA a 36-6 lead. 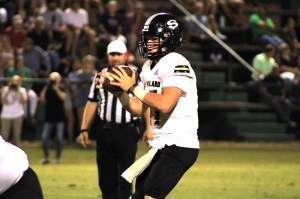 As bad as things were going for SAR, the Raiders did not quit. Early in the fourth quarter, SAR quarterback Chase Ledger connected with Buddy Brady for a 67-yard touchdown. The extra point by Henry Johnson was good and the Raiders cut the PCA lead to 36-13.

However, the Raiders would later turn the ball over when the Patriots forced a fumble. Walker Todd recovered the fumble and ran the ball back 45 yards for a PCA touchdown. The Patriots went for two once again and succeeded when Wasson found Walt Durrence in the end zone.

The Raiders were able to score another touchdown when running back Greer Hagerson scored from 25 yards out, but the Patriots would later cap off their dominating performance in this game when Banks Booth threw a 26-yard touchdown pass to Jake Rodgers. Booth then ran the ball into the end zone to score the two-point conversion and PCA went on to win 52-19.

The Raiders (1-2) will try to rebound from this setback when they host Westfield next Friday, September 17 at Harvey Simpson Stadium. Kickoff is scheduled for 7:30 p.m.