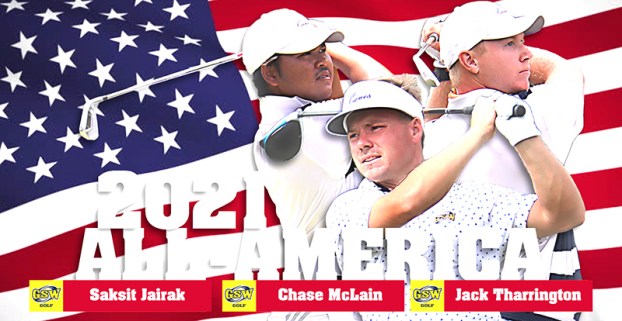 McLain was named to the All-America Third Team, while Jairak and Tharrington received Honorable Mention as GSW, coming off a national runner-up finish, placed three on the list for the second consecutive season.

McLain was one of the driving factors towards GSW’s run in the NCAA National Championships that led to the Hurricanes’ appearance in the finals of match play. A junior from Leesburg, GA, McClain played in all 11 events for the Hurricanes with four top-10 finishes and two top-five results. He was third at the University of North Georgia Fall Invitational, where he shot a second-round 64 to tie for the low round in the Peach Belt Conference this year. McClain was also fifth at the Argonaut Invitational. In the NCAA Tournament, he finished 15th following three rounds of stroke play and then picked up a crucial point with a nine-stroke win against Indianapolis in semifinal match play. McClain also won his match in the national final against Arkansas Tech and closed the season at No. 19 in the NCAA Division II Golfstat computer rankings.

Jairak earned his second All-America honor. The junior from Nakhonsawan, Thailand was second on the team in scoring average and ninth in the Peach Belt Conference with a 72.36. Jairak played in all 11 events for the Hurricanes with five top-10 finishes and three top-five results. His best finish was a runner-up showing at the 80-player Southeastern Collegiate in Valdosta, GA on March 15-16, which earned him Peach Belt Golfer of the Week honors for the second time in his career. Jairak tied for fourth at the Peach Belt Conference Championships and helped the Hurricanes advance to match play at the NCAA National Championships with a 15th place finish in stroke play. He won his national quarterfinal match against Texas A&M University-Commerce by 11 strokes and posted a tie-breaking win in the semifinal match to get the Hurricanes to the championship. Jairak closed the season at No. 24 in the NCAA Division II Golfstat computer rankings.

A freshman from Boca Raton, FL, Tharrington played in eight events for the Hurricanes and peaked at the ideal time with his best scores coming in the postseason. Tharrington helped the Hurricanes advance to match play at the NCAA National Championships with a three-round score of 218 (2-over-par) for a 15th place finish in stroke play. He won his match in the national final by nine strokes, the Hurricanes most convincing win, and put GSW ahead in the overall team score, 2-1.

Below is the list of 2021 NCAA Division II PING All-America honorees.