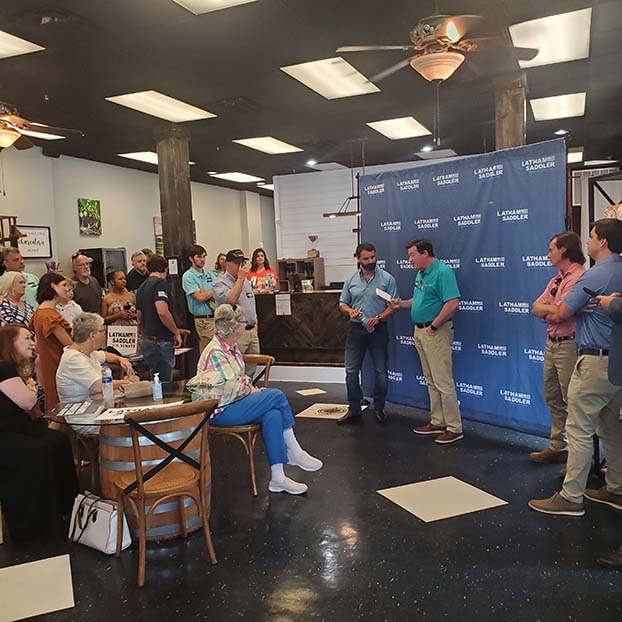 Latham Saddler, a Republican hopeful for the Georgia’s senate seat visited Americus on Wednesday, 7.20.21. Saddler, his wife Melissa and their two young sons were greeted by a group of locals at Wolf Creek Winery in downtown Americus. Saddler will face a Republican primary and he is hopeful to face the Democratic contender in November of 2022. 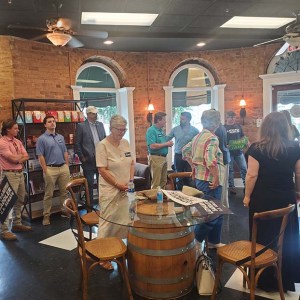 Saddler is a University of Georgia as well as a Georgia Institute of Technology graduate. Although he had never had a desire to join the military, 9/11 stirred his soul into action and he began to pursue a career as a Navy SEAL. His path to become a SEAL was not as straightforward as he was hoping, however, it ultimately came to fruition. Latham will admit his time serving alongside his fellow SEALs is the greatest honor of his life. While on active duty, Latham deployed to Afghanistan and Iraq, then received orders to serve at the White House as Director of Intelligence Programs on the National Security Council during the Trump Administration. Latham then received acceptance into the prestigious White House Fellows program where, among other duties, he worked on the First Step Act, criminal justice reform legislation which was also championed by Georgia Republicans who had seen these changes work in our state.

Latham reports coming home to Georgia and enjoying investing in his family and his community. However, he reports, “then 2020 happened. As patriots and folks who love this country, we all know that what’s transpired in the last year or so, something ain’t right, and we all feel it.” He reports because of the times, much like he did post 9/11, he felt a conviction to “step up and do something.” As a security specialist he listed the rich Georgia history has a “national security expert in the senate.” However, for the first time since War World II, Georgia does not have a senator serving the Armed Services Committee. After much consideration and knowing the lifestyle change which running for senator will require, his passion to serve our state, as well as our country in this manner remained. As a “security guy” he was able to identify external threats, however in 2020 he began to see internal threats. Alarmed at how quickly the country began to backslide, his commitment became stronger. Ultimately, he became convinced there was a need for “authentic leaders stepping up to serve in public office.” Having been campaigning for months, he reports the response is good, and there seems to be a “thirst for something different—a next generation conservative for this job.”

Latham sees two threats facing the county, the first being communist China’s desire to replace America on the world’s stage. He was able to site the regression the country is making as China is growing. The second threat he sees happening “right here at home. It’s this sweeping movement that’s invading every aspect of our lives. It’s trying to tear down our history, tear apart our constitution and make it hip to hate America.” Saddler reports he sees a force demanding conformity and if it does not happen, there is a movement to ruin reputations, families and businesses. “This will not stand in America.”

Saddler reports the three pillars of his campaign are security, liberty and prosperity. Putting “adversaries back on their heels” is something Saddler reports is dear to him as a man who is specialized in security. Saddler sees liberty as being a fundamental principal for making American lives rich. While he reports the second amendment will be threatened, he is growing concerned over the first amendment as there have been consistent complaints against silencing political ideas. He tells of a personal experience in which his campaigns outreach was limited because it was removed from social media when first announcing his run for senator. “Our liberty is under attack, and we need somebody who is willing to fight against that.” Prosperity is imperative. He points out the American economy and the American worker need defending. He sees the national debt is a crisis. “Dignity not dependency” is Saddler’s theory on how to support Americans. He reports in his discussions with small business owners, he is hearing a definite message, “I cannot find workers; I cannot compete with a free government paycheck.” Saddler reports as a conservative he seeks “limited government which creates economic opportunity for the American worker, where they gain dignity out of that work. We are seeing the exact opposite of that right now out of Washington. We are seeing a massive government that’s creating a moral hazardous dependency upon it, so that’s got to change.” Latham claims “Georgia deserves to have the right policies back in Washington.”

Saddlers’ grandparents are from Bainbridge. He states some of his favorite memories are spending time on the Flint with them growing up. He also has a fraternal twin brother, Ashton, who has Down’s Syndrome. Latham reports as his parents grow older, he and his wife will take over the care of Ashton.  There is a passion for Georgia and the United States Latham owns. As his website phrases it, “Latham Saddler believes in the resilience of America and Americans. Today, he sees our nation being challenged abroad like never before; he sees us fighting with our neighbors here at home; he sees our country lacking authentic leadership. And he knows it is time for his generation of leaders to step up and chart a new course for the future.”

To learn more about Saddler’s background and ideas, please visit his website at lathamsaddler.com and on Facebook, he can be found at Latham Saddler. The election for senator will take place on November 8, 2022. To date, three candidates, including Latham have announced they will be seeking election on the Republican ticket.