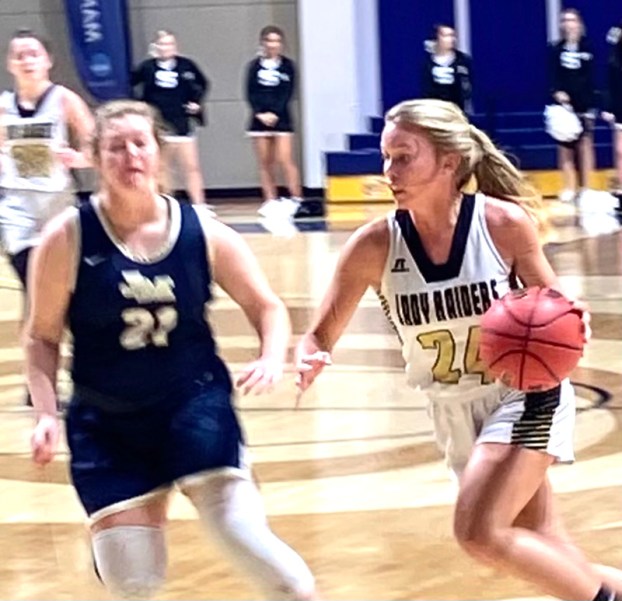 Southland Academy senior guard Maddie Crisp (24) scored 19 points and made 9 of 12 free throws in the fourth quarter to lead the Lady Raiders to a 48-39 victory over John Milledge Academy in the state semifinals of the GISA Class AAA State Tournament. Photo by Ken Gustafson

AMERICUS – After three quarters of play, the Southland Academy Lady Raiders (SAR) were tied with John Milledge Academy (JMA) 26-26, but after SAR senior forward Holly McCain knocked down two free throws to give the Lady Raiders the lead, McCain made a defensive play in the fourth quarter that would change the trajectory of the game. Her steal with a little over five minutes left in the game led to an 8-0 run by the Lady Raiders, which would eventually lead to their 48-39 victory over the JMA Lady Trojans in the Georgia Independent School Association (GISA) Class AAA State Semifinals on Thursday, March 3, at the GSW Storm Dome.

As they have done all year, the Lady Raiders (19-3) used their defense to make their offense go, which is exactly what SAR Head Coach Ty Kinslow wanted his club to do.

“Our defense has carried us all year,” said Kinslow. “We told our girls that just getting out here on this stage in the Final Four, we might not shoot the ball well coming out, but if we will play defense, we will get use to the pace of the game. We’ll get use to how big this game is and settle down. That’s what we did. We just let our defense keep us in it until we started making some shots.”

With the win, the Lady Raiders are one more victory away from doing something that hasn’t been done at Southland since 1986; winning a state championship in girls’ basketball. JMA finishes its season with a record of 24-5.

The 2018-2019 Lady Raiders made it to the GISA Final Four two years, but fell to Holy Spirit Prep.

Maddie Crisp led SAR in scoring with 19 points and made some key free throws down the stretch for the Lady Raiders. In the fourth quarter, Crisp went 9 for 12 from the foul line to help seal the victory. Riley Mitchell was also in double figures with 11 points and McCain chipped in seven, including 3 of 4 foul shots in the fourth quarter. 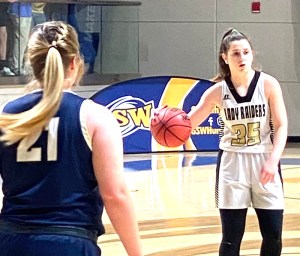 During the opening minutes of the game, the Lady Raiders struggled with the full court press of the Lady Trojans and fell behind 4-0 before McCain scored SAR’s first basket. Over the next several minutes, both teams went through a scoring drought, but SAR only trailed 8-4 at the start of the second quarter.

During the first couple of minutes of the second quarter, the Lady Raiders were able to cut their deficit to 10-8 on a basket by Haleigh Warren, but with 4:54 to go before halftime, Olivia Rhodes nailed a jumper to put JMA back up 12-8.  Mitchell would later bring SAR back to within two on two made free throws, but JMA responded as Brayden Latimer scored with a little over two minutes left in the half.  Both teams would trade baskets over the final minute of the half and the Lady Raiders trailed at halftime 15-14. 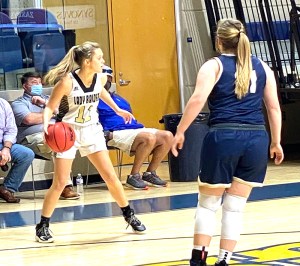 During this low-scoring first half, the Lady Raiders were able to stay in the game by being patient on offense and working for the good shot. While they struggled in the early going with JMA’s full court pressure, SAR was able to settle down and run its offense for much of the first half.

The Lady Trojans struck first early in the third quarter when Cadence Bandows drilled a three-pointer to give JMA an 18-14 lead. However, SAR struck back when Crisp nailed a three-pointer to bring SAR back to within one. As one would expect in a state semifinal game, both teams were fighting back and forth, but the outcome of the contest would be determined by who would make free throws down the stretch and who would make the fewest mistakes.

However, the Lady Trojans were able to go on a 6-0 run to take a 24-17 lead, prompting Kinslow to call a timeout with a little more than three minutes left.  Out of the timeout, the Lady Raiders rose to the occasion by going on a 6-0 run of their own, which was capped off by a jumper from Mitchell. 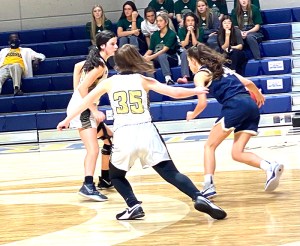 Riley Mitchell (35) and Haleigh Warren try to double team the JMA point guard. Throughout the entire season, the Lady Raiders have specialized in making defensive plays to create their offense and they did the same thing in their win over JMA.
Photo by Ken Gustafson

The Lady Raiders continued to be slow, methodical and patient in their half court sets as they tried to work for the best shot. They held the ball all the way down to the last second of the third quarter before Mitchell struck again with a three-pointer at the horn, tying the game at 26-26 and electrifying the large and loud Southland contingent inside the Storm Dome.

McCain was able to give SAR the lead early in the fourth quarter on two made free throws, and that would be the beginning of a crucial 8-0 run by SAR.

With a little over five minutes to go, McCain came up with a steal and Crisp drilled a three-pointer to give the Lady Raiders a 32-26 lead. SAR was able to get another stop on the defensive end and another basket from Mitchell to extend the SAR lead to 34-26.

That steal by McCain, coupled with the three-pointer by Crisp and subsequent basket by Mitchell, proved to be crucial plays in the game that not only gave the Lady Raiders an eight point lead, but would eventually lead to SAR’s victory. 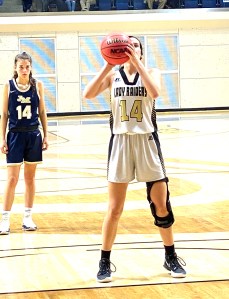 Haleigh Warren is at the free throw line late in the game for the Lady Raiders. Warren scored three points in the win over JMA.
Photo by Ken Gustafson

Over the next couple of minutes, SAR was able to maintain its lead due to clutch free throw shooting by Crisp and Morgan Weaver. Then with a little less than a minute left, Haleigh Warren made one of two foul shots to give SAR a 42-33 lead. However, JMA was not quite done as Bandows drilled another three-pointer, cutting the lead to six. Crisp responded by getting fouled and knocking down two foul shots, but Olivia Rhodes kept hope alive for JMA with a three-pointer, cutting the SAR lead to 44-39.

However, that would be as close as the Lady Trojans would get as Crisp stepped up and knocked down four more foul shots to secure the 48-39 victory for the Lady Raiders.

Rhodes led JMA in scoring with 19 points and Bandows scored nine points in the losing cause.

The Lady Raiders will take on Westfield (19-3) in the GISA Class AAA state finals on Saturday, March 6. The Lady Hornets defeated Holy Spirit Prep 54-53 on a layup in the waning seconds in the other state semifinal game.

Ironically, SAR’s first game of the season was against Westfield and resulted in a 28-21 defeat back on December 1, 2020.  Now the Lady Raiders will get a chance to return the favor on the biggest stage of all.  Tip off is set for Saturday at 6:20 p.m.