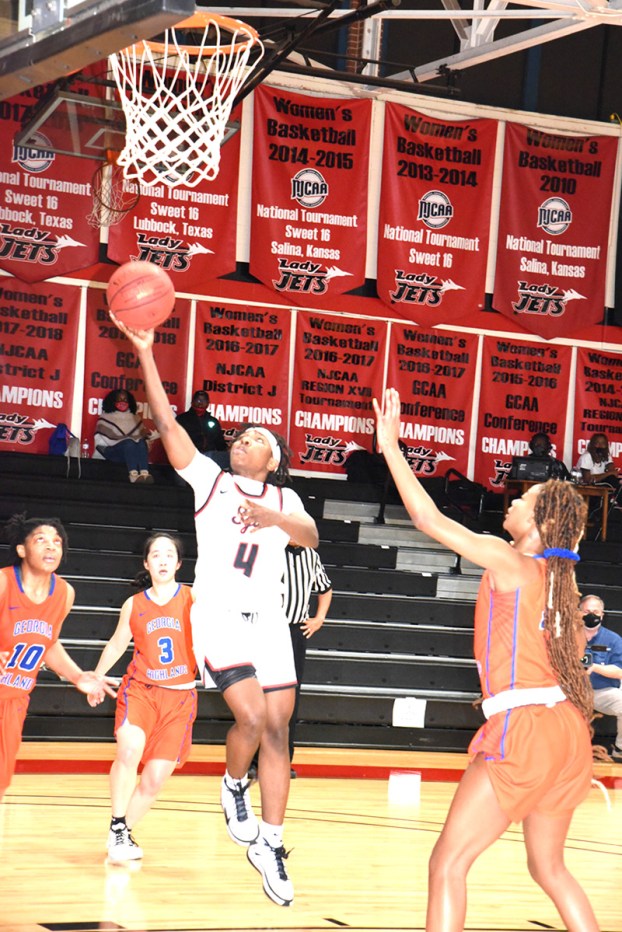 South Georgia Tech’s Veronica Charles (4) led the Lady Jets in scoring with 21 points to lead her team to an 84 – 82 double-overtime win against Georgia Highlands. Photo by Su Ann Bird

AMERICUS – In a battle between two unbeaten nationally ranked Georgia Collegiate Athletic Association (GCAA) teams, the South Georgia Technical College Lady Jets (SGTC) outlasted the Georgia Highlands Lady Chargers in an 84 – 82 double-overtime victory to take sole possession of first place in the GCAA standings and remain unbeaten in the conference.  The SGTC Jets were not as fortunate.  They dropped a 70 – 67 over-time decision to Southern Crescent Technical College in Griffin in their GCAA match-up.

The Lady Jets are now 7 – 0 in the GCAA and 13 – 1 overall.  Georgia Highlands slipped to second place in the GCAA after the loss with a 6 – 1 GCAA record and an 11 – 2 overall performance.  SGTC is currently ranked fifth in the National Junior College Athletic Association (NJCAA) and Georgia Highlands was ranked 24th in the nation this week.

“I am proud of our team for finding a way to win,” said South Georgia Technical College Athletic Director and Lady Jets head coach James Frey.  “Georgia Highlands is extremely talented.  They have one of the top players in the country and she can really score.  Coach Harrell does an incredible job with his team.  They play really hard.”

Georgia Highlands scored first in the contest and went ahead 8 – 0 before SGTC finally put two points on the board at the 6:46 mark.  SGTC continued to close the gap and finally went up 17 – 16 at the end of the first quarter.

The Lady Chargers took charge in the second quarter and outscored the Lady Jets 20 – 13 to take a 36 – 30 lead at the end of the first half.  There were four lead changes and one tie during the first 20-minutes.

The SGTC Lady Jets had an impressive third quarter and outperformed Georgia Highlands 19 – 8 to go up 49 – 44 late the end of the third quarter.  Georgia Highlands made up that difference in the fourth quarter and the regulation game ended with the two teams tied at 65 all.  Both teams added 13 points in the first over-time to remain tied at 78 – 78 and force the game into a second over-time.

SGTC was finally able to secure the 84 – 82 win after Imani McNeal sank two free-throws with 37.6 seconds to give the Lady Jets an 84 – 80 lead.  Georgia Highlands scored six seconds later to make it an 84 – 82 battle but neither team was able to score in the final 31.4 seconds and the game ended with the Lady Jets on top.

The Lady Jets now travel to Rome on Friday and Saturday, March 5-6, for a rematch.  “Playing Georgia Highlands three times in a week is going to be brutal,” admitted Coach Frey.  We have to find a way to try to scratch out a win in one of the two games this weekend.  It will be tough to do there.  They made us play a small lineup and we aren’t used to playing that way,” said Coach Frey.  “We have got to work on that and try to get more comfortable in it.”

Sophomore guard Veronica Charles, 5’ 4” from Benue State, Nigeria, led the Lady Jets in scoring despite fouling out with about four minutes left in the regulation contest.  She had a total of 21 points, 14 of those came in the first half.  She was eight of 14 from the floor, one of five from the three-point line and four of six from the foul line.  She also ended the night with six rebounds, one assist and three steals.

Freshman guards Mikya Simmons and Abby Solway as well as Moe Shida also scored in double-figures for the Lady Jets.  Simmons and Solway both had 15 points and Shida added 14.  Simmons led the team in rebounding with eight.  She also had four assists and one steal.  Solway contributed six rebounds and had two steals.

Moe Shida, coming off an ankle injury, ended the night with 14 points, all of which came in the second half and two overtimes.  She was followed by Femme Sikuzani and Niya McGuire with six points each, Imani McNeal with five and Flore Ngasamputu with two points.   Georgia Highlands was led in scoring by Jashanti Simmons who ended the night with 39 points and 14 rebounds.

“We had one of those nights where we couldn’t buy a basket,” said South Georgia Technical College Jets interim head coach Chris Ballauer.  “The guys played hard and did a good job executing what our game plan was but you cannot go two of 25 from the three point line when it’s a third of your total shots and expect to win.”

Ballauer said his team will refocus and get ready for their match-up with South Georgia State on Thursday.  “We control our own destiny for the regular season championship, but it starts tomorrow traveling to Waycross and taking care of business.”

The Jets were led in scoring by Jalen Reynolds with 25 points and 17 rebounds.  Will Johnston had 18 points and five assists.  Johnston also hit a last second basket to force the game into overtime.