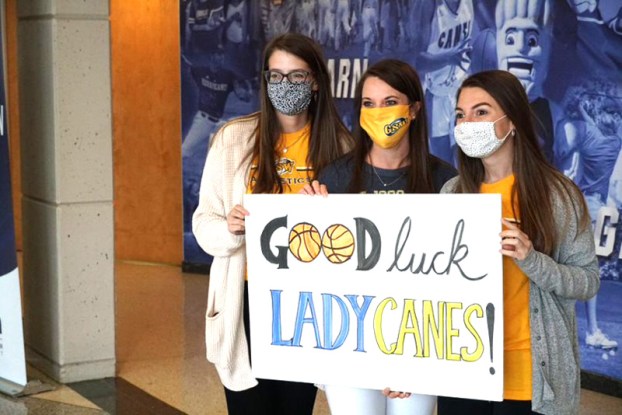 GSW faculty, staff and students show their support for the Lady Hurricanes at a send-off in the lobby of the GSW Storm Dome as the GSW women’s basketball team was getting on the bus to go to Greenwood, S.C. to compete in the Peach Belt Conference Tournament for the first time in school history. Photo by Chelsea Collins

AMERICUS – The Georgia Southwestern State University women’s basketball team is headed to the Peach Belt Conference (PBC) tournament semifinals for the first time in school history. The Lady Hurricanes received a warm send-off today in the Storm Dome lobby from faculty, staff and students as they made their way to the bus headed for Greenwood, S.C. GSW is the #4 seed in the tournament and will play No. 1 Lander University at LU on Wednesday, March 3rd, at 5:30 p.m.

With the Hurricanes also playing in the men’s PBC tournament, GSW is the only school in the PBC to have both programs qualify for the tournament. The men’s basketball team, who earned its first PBC semifinal tournament berth since 2014, currently sits 5th in the region and will play Thursday, March 4 at 8:00 p.m. at Georgia College in Milledgeville.