Chief Mark Scott: “Ready and willing to start the… 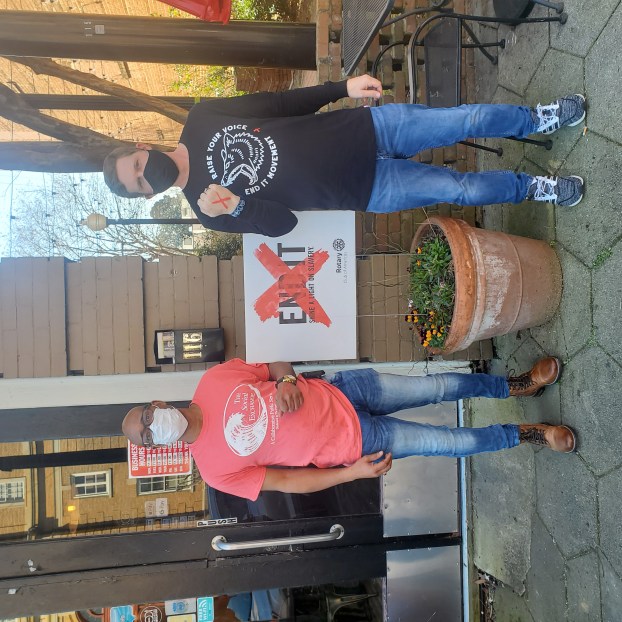 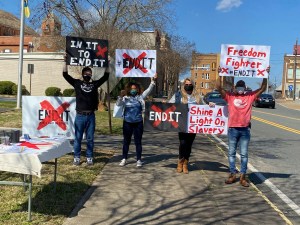 Several of our neighbors were out raising awareness for an issue close to their hearts on Thursday, February 25th. The Social Exchange and the Sumter Chapel invited our community to learn about a pressing issue which is affecting our neighborhoods as well as many across the world. Rotarians, other church families, law enforcement and many more accepted the invitation sent forth from the Sumter Chapel and The Social Exchange. They invested by doing one simple thing: “shine a light on slavery.” Human trafficking is indeed a form of slavery as people, without their consent, are sold into forced labor mostly in preforming sexual acts against their will. They are demanded to give up any rights to their own bodies and are completely dependent upon a “pimp” for any form of life sustainment. The END IT Movement emphasizes the need for simple awareness. Our village heard their call. According to the END IT Movement website, enditmovement.com, our voices and our awareness of the slavery is a powerful place to start in addressing the issue. “You can’t take a stand against something you don’t know exists. That’s why as END IT Movement, we focus our energy towards awakening the world to the fact that not only does slavery still exist, but that it’s more prevalent now than at any other time in history. It may seem like raising your voice isn’t doing enough, but as each of us comes alongside each other, we become a mighty roar calling culture’s attention to the scourge of human trafficking.”

There were a lot of friendly faces to help inform our community on the issue. Carl Reid of The Social Exchange explains, “We are here to bring awareness to human trafficking. This is the End It Movement day. We want to bring awareness that Georgia is a large hub, the United States is one of the largest countries where human trafficking happens.” Carl makes it clear that our state, with all that it offers, is also a gateway for human trafficking. Atlanta is a popular area for traffickers. A victim can be kidnapped or stolen and sold into slavery. There are over 40 million victims of human trafficking and 1 out of every 4 is a child. Women and girls make up 71% of the victims.

Drew Anderson, who leads at Sumter Chapel and serves as coordinator and Sumter County representative for the End It Movement, reports there is a very real chance there are victims in our area. “People still don’t realize it is present in Southwest Georgia. It is not necessarily locals but victims coming through our area.” Drew goes on to describe the trafficking as “very transient” and it is specifically designed so because in moving around “law enforcement has a harder time tracking them.” Perpetrators will “come through the area looking for victims or taking a victim with them.” Drew believes there are “so many people who still don’t see it as an issue. The victims are not willing to do this. Essentials are taken from them and their lives and the lives of their families are threatened” should a victim ever consider trying to flee to freedom. If a victim ever becomes brave enough to leave, she requires a safe home where her pimp does not know where she is located. Drew also reports that pimps are often not slowed down when a law enforcement intervention is completed. They will continue to seek to bring the victim back into the slavery. Darryl Brown, who serves First United Methodist Church was quick to point out human trafficking is a 150-billion-dollar industry. To lose a victim will cost those trafficking a lot of money, therefore they are motivated to keep business fruitful. 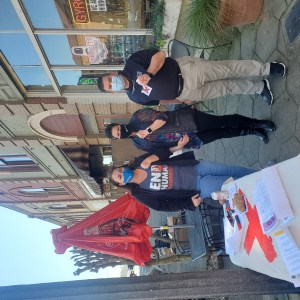 Rotarians Susan Ruckman, Angela Smith and Darryl Brown join their voices to the cause

Susan Ruckman, a Rotarian, was also on hand to help our community understand the issue. She spoke on the fact this is happening in Sumter County. Sheriff Eric Bryant had spoken to a church group the evening before and indicated to the congregation that the Sumter County Sheriff’s Office had intervened in a trafficking case in Plains. In addition to being aware of the problem, Susan advises we keep our eyes open for any suspicious activity in which a person may appear fearful. Susan reminds us we can simply ask if a person is okay. In Susan’s opinion, paying attention to what is going on around us can be of great help. Should you become suspicious, contact the local law enforcement agencies. Your phone call can remain anonymous should you wish. Darryl Brown also added to Susan’s words. He feels it is “important to get to know your neighbors. We live next door to people we don’t even know. Let’s step out and say ‘hey’ and spend some time getting to know them. If we do recognize something out of the ordinary, we can report that. But it’s hard to know if it’s out of the ordinary if we don’t know our neighbors.” It is quickly pointed out getting to know your neighbors is a positive for so many reasons.

The event moved around during the day. They could be found at Café Campesino for the breakfast hours, Gyro City Mediterranean Grill for lunch hours, and 1800 for dinner hours. There were also volunteers located at the Americus Police Department as well as Georgia Southwestern State University. To grow beyond being aware, there is a simple to use training program at iamonwatch.org. It is a survivor-led training “designed to empower you to spot, report and prevent sex trafficking where you live, work and play. Through true survivor experiences, industry experts explain the key indicators of trafficking, as well as how you can support a survivor’s path to freedom.”