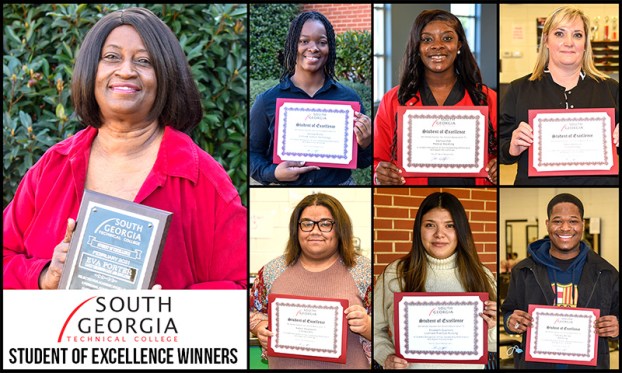 In nominating Porter, Cripe said “Mrs. Porter has been a student of excellence in early childhood throughout her time here, with exceptional grades and work ethics.  She is a dedicated, sincere asset to our college and to her community.  She looks for every opportunity to learn, to enrich her knowledge, to serve others, and to achieve her goals.  She will be completing her AAS Degree in May and will be missed in the Early Childhood Care and Education program.”

Porter expressed her appreciation for the honor. “I am continuing my 21-year career in education as a paraprofessional in the Marion Co. School System,” she said, “but I wanted the credential that SGTC offered so that I can hold a degree, as many of my family members have attained.  I am very honored and happy to receive the Student of Excellence award.  I have worked hard and am very thankful.”

As the winner, Porter was awarded with a plaque of recognition, a personal letter of recommendation from SGTC President Dr. John Watford and a $50 check for her accomplishments. Additionally, her name will be displayed on SGTC’s digital marquee as well as inscribed on a plaque in Hicks Hall among previous Student of Excellence winners. Each nominee was awarded with a nomination certificate and an exclusive student of excellence t-shirt.