Americus-Sumter’s football game at Mary Persons cancelled due to… 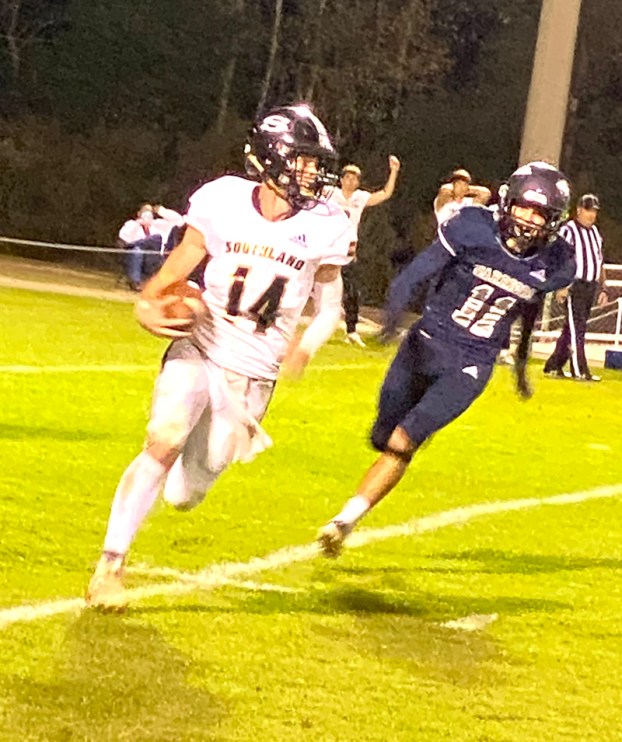 THOMASVILLE, GA – Coming off their 44-12 throttling of Tiftarea Academy the week before, the Southland Academy Raiders (SAR) made the 101-mile trek down near the Florida state line with hopes of continuing that success against the top team in GISA Region 3-AAA: The Warriors of Brookwood (BKW). However, the Warriors came up with three big plays on special teams in the first half: a blocked field goal, a blocked extra point and a blocked punt. Those plays on special teams, coupled with turnovers and penalties committed by the Raiders throughout the game, would lead to a 30-6 loss to BKW on Friday, November 20 at the Brookwood School in Thomasville. 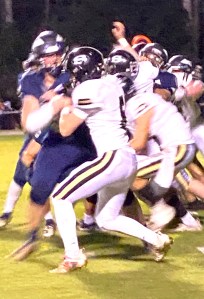 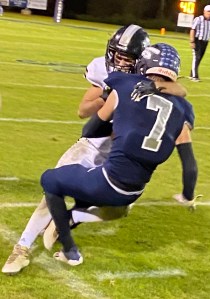 Friday night’s loss to the Warriors eliminated the Raiders from GISA State Playoff contention. Therefore, that game was the last game that SAR seniors Nathan Duke, Colman Fort, Will Toms, Owen Exley, James Griffin and Collins Bass will play in a Southland uniform.

In spite of the loss and not qualifying for the state playoffs this year, SAR Head Coach Rod Murray was extremely pleased with his club’s effort against BKW and throughout the season, especially the effort put forth by his six seniors.

“I’m proud of this team.  They never gave up.  I’m proud of our six seniors,” said Murray. “This team is relentless in their effort. We will be back soon.” 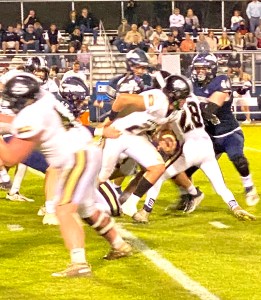 The Warriors got the ball first and decided to test the Raiders’ secondary early. BKW quarterback Dallas Forsyth attempted several long pass plays to try for a quick score. The Warriors even tried to go for it on fourth and 10 from the SAR 40-yard line, but Forsyth’s fourth-down pass fell incomplete and the Raiders took over on downs. 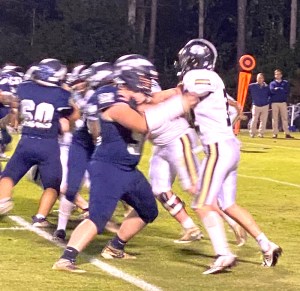 Southland Academy defensive back Colman Fort tries to fight through a block against Brookwood.
Photo by Ken Gustafson

However, later in the first quarter, the Raiders were about to punt he ball, but a personal foul was called against SAR. This forced SAR punter Chase Ledger to have to punt from deep in the Raiders’ own territory and it gave the Warriors great field position.

On the ensuing punt from Ledger, BKW returner Nathan Yokley was able to return the ball deep into SAR territory. Then on second and five from the SAR 29, Forsyth threw a 29-yard touchdown pass to Jacob Lauderdale. The extra point was good and the Raiders found themselves trailing 7-0 with a little more than six minutes left in the first quarter.

However, the Raiders came up with a creative play to get themselves back in the game. On third and 19 from the SAR 36-yard line, quarterback Nathan Duke executed a hook and lateral play to Hudson Collins, who ran the ball 64 yards for an SAR touchdown. However, Ledger’s extra point attempt was blocked and the Warriors maintained a 7-6 lead. 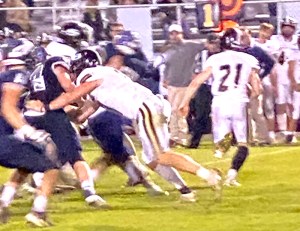 Southland Academy running back Hudson Collins (#21) carries the rock. Collins scored a 64-yard touchdown on a hook and lateral play against Brookwood.
Photo by Ken Gustafson

Later in the quarter, the Raiders came up with a turnover when the punt returner for BKW fumbled the football and the Raiders came up with the recovery, giving themselves field position. They were then able to move the ball down to the BKW 14-yard line. However, Duke was sacked for a six-yard loss and got brought down again for an 11-yard loss as he was trying to scramble for yardage. This forced SAR to try a 46-yard field goal. However, Ledger’s field goal attempt was blocked and the Raiders’ golden opportunity to score went by the boards.

The Warriors took advantage by moving the ball down into SAR territory. Yokley ended up capping off the BKW drive with a touchdown. The Warriors decided to go for two and succeeded, increasing their lead to 15-6.

Then with 20 seconds left before halftime, BKW capped off another scoring drive when tight end Ethan Meyers scored the first of his two touchdowns on the night. Once again, BKW decided to go for two points and succeeded. By halftime, the Warriors had a 23-6 lead over SAR. 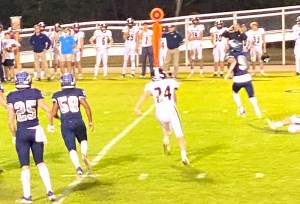 Special teams issues, turnovers and penalties played a huge part in the Raiders’ first-half struggles and set the tone for the rest of the game. Though they tried as hard as they could, the Raiders were not able to climb out of the hole they were in and much of that is due in part to the strong defensive play of BKW.

SAR got the ball to start the second half, but turned it over on a fumble deep in their own territory. BKW took advantage by capping off a short drive with Meyers’ second touchdown of the game. The extra point was good and the Raiders found themselves in a deep hole, trailing 30-6.

Things got worse for SAR in the waning seconds of the third quarter, as the Raiders turned the ball over again on a fumble. The SAR defense thought they had returned the favor when Duke intercepted Forsyth’s pass on third down and 30. However, a pass interference penalty was called against SAR, making it third and 13 for BKW. However, the Raiders were able to stop the Warriors on the next two downs and got the ball back on their own 33-yard line. 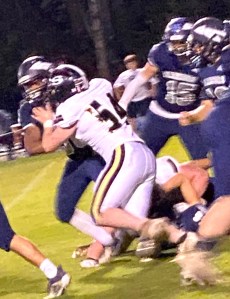 Unfortunately for SAR, the offense was unable to move the football against the stout BKW defense and the Raiders were forced to punt the ball away. 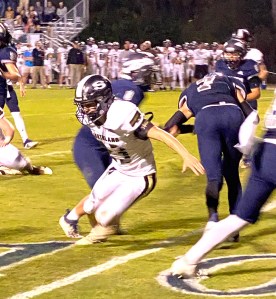 However, the Raider offense once again was unable to mount a drive and the BKW offense was able to move the ball inside the SAR 30-yard line with a little over three minutes left in the game. Fortunately for SAR, even though the game’s outcome had been decided, the Raider defense refused to quit and came up with another stop.

However, BKW would end up claiming its first region championship since 2007 with a 30-6 win over SAR. 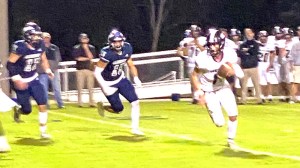 Southland Academy quarterback Nathan Duke rolls to his left and tries to scramble for yardage against Brookwood.
Photo by Ken Gustafson

Though the season did not go as planned for the Raiders, they faced the daunting challenges of playing and competing within the crucible of the COVID-19 Pandemic with grit, toughness, dignity and honor. Being that they are only losing six seniors, the 2021 Southland Academy Raiders will feature a corps of veterans who will have experienced unprecedented challenges. The challenges that this year’s SAR squad has had to endure should enable them to accomplish great things in 2021. Next year’s Raider team will be a senior-laden team with 13 seniors, seven juniors and nine sophomores. In other words, there is a lot to look forward to in 2021 regarding the Southland Academy football program.