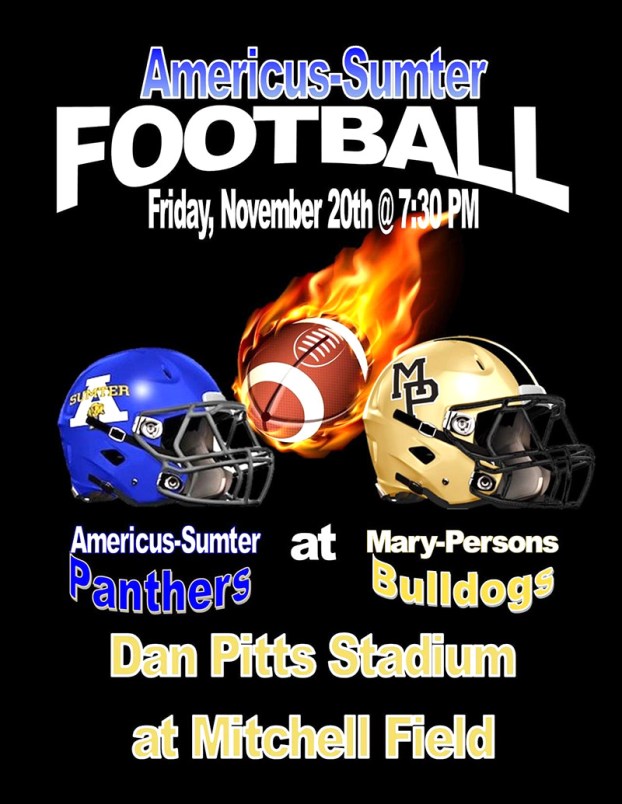 The Americus-Sumter High School football team was scheduled to play its final regular season game tonight at Mary Persons, but the game has been cancelled due to the fact that an ASHS staff member has tested positive for COVID-19. Photo by the Americus-Sumter Panthers Touchdown Club

AMERICUS – Tonight’s football game between the Americus-Sumter Panthers and the Mary Persons Bulldogs has been cancelled due to the fact that a member of the ASHS football staff has tested positive for COVID-19, this according to ASHS Athletic Director Coleman Price.

Price released a statement earlier today stating that Sumter County Schools and Americus-Sumter High School Football have cancelled tonight’s game at Mary Persons, along with all other football activities.

“As a precautionary measure, the administration has asked all team staff members and players to self-quarantine for the next week,” stated Price.

The Panthers (1-7), who are coming off their first win of the seasons against Pike County last week, were hoping to end the 2020 season on a positive note with a win over the Bulldogs, but with this recent turn of events, the seasons has now concluded.

The virus has caused other issues involving ASHS athletics as well. According to Price, the defending GHSA Class AAAA State Champion ASHS girls’ basketball team was supposed to begin the 2020-21 season tonight at a tournament at Wilkinson County, but that tournament has been cancelled due to an outbreak of COVID-19 cases in Wilkinson County. The Lady Panthers were also scheduled to play Duluth High School at a tournament in Carrollton on Saturday, but Duluth has had to cancel that game due to issues with the virus. Instead, the Lady Panthers will be playing Starr’s Mill High School in Fayetteville, GA tomorrow at 12 p.m.

Stay tuned to the Americus Times-Recorder for further updates.