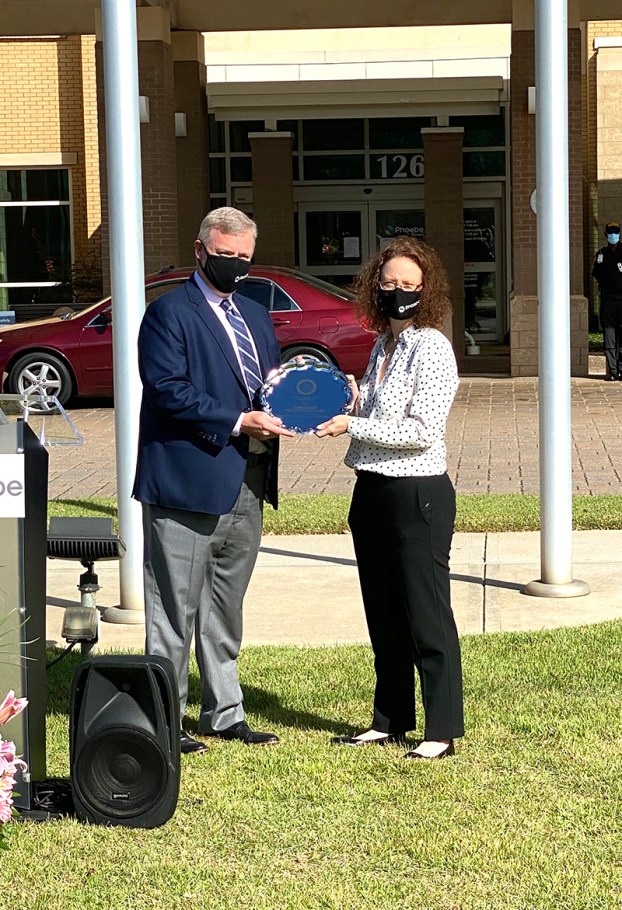 AMERICUS – On Tuesday, October 20, the Phoebe Sumter Auxiliary (PSA), along with Phoebe Sumter Medical Center (PSMC), held and awards ceremony on the front lawn of the hospital. The Council on Volunteer Services for the Georgia Hospital Association normally holds its annual awards ceremony at its annual state conference in Augusta, but due to COVID-19, the conference was cancelled.

However, PSMC, along with tis CEO, Brandi Lunneborg, were both up for awards and they were both given out at this awards ceremony on Tuesday.

One of those awards was for CEO of the Year and it is awarded to the best CEO of all the hospitals in Georgia. This year, it was presented to Brandi Lunneborg, CEO of PSMC.

Lunneborg, who was complete caught off guard and surprised, told the Americus Times-Recorder that it was such a lovely surprise and a true honor. “Our Volunteer auxiliarians are an integral part of the team at our hospital and I enjoy supporting them to provide caring service every day through their work and fundraising efforts,” said Lunneborg. “To be recognized by them is very special. They are true servant leaders in our community and that is what I aspire to be, so I am very honored and humbled by their recommendation and support.”

Robbie Lattimore, Chairman of the PSMC Board of Directors, thanked the PSA for its thoughtfulness in writing a letter to nominate Lunneborg. “We know we easily can write a negative letter when there’s a problem, or a complaint letter, but we don’t so quickly write a letter or recommendation, or a letter of congratulations, so thank you all for taking the time to write the letter to nominate Brandi,” said Lattimore. “Brandi, it has been my joy. It has been wonderful working with you for all of these six years and we look forward to you continuing your leadership here at Phoebe,” continued Lattimore. She went on to say that Lunneborg could not do what she does by herself and praised the “wonderful team” of doctors and nurses and everyone who works at the hospital. “It takes everybody to make a team,” said Lattimore. “Thank you all for working closely with her and thank you for supporting her leadership. We are proud to have Phoebe Sumter in our community.”

In addition to CEO of the Year, other awards were given out as well. The Council on Volunteer Services for Georgia Healthcare honored PSMC as the 2019-2020 recipient of the Community of Conscience Project Award for mid-size hospitals. Becky Dodson, RN, who works in the hospital’s oncology department, received the award on behalf of the hospital. 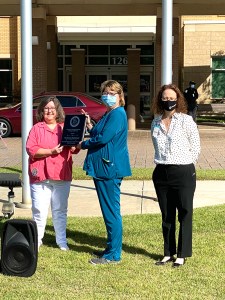 Lunneborg praised the members of the PSA for their hard work on behalf of the hospital and the community and she praised Nurse Dodson for her hard work as well. “Our oncology clinic is blessed to have someone sitting at their front desk to greet our patients and they’re very observant,” said Lunneborg to the group gathered. “You can tell that they’re there for the reason to take care of the community and provide great service because that’s how they determined we needed this award and have helped us secure it so that our patients can get in and out of the clinic more easily. That, to me, shows where your hearts are and how you are helping us every day to continue to be the best that we can be for our community. We are so grateful for our volunteers and everything they do for us. To the organization that is giving us this award, thank you on behalf of the hospital and our patients,” continued Lunneborg.

There was another award given out on this beautiful, sunny fall day. It was an appreciation award given by the auxiliary and it was given to Marcus Johnson, who is the Director of Community Relations and Patient Experience at PSMC. In addition to holding that position, Johnson is also the Liaison for the PSA and he was presented with an appreciation award for his service in that role.

Linda Holloway, one of the members of the PSA, told the crowd gathered that Johnson regularly attends the auxiliary’s meetings and contributes by making suggestions from the hospital that would help both the PSA and the community. “He takes our project ideas that we have and helps to make it work here in the hospital,” said Holloway. 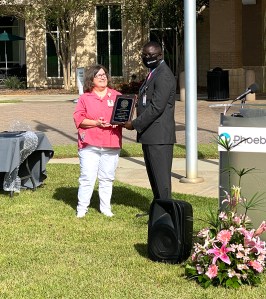 Marcus Johnson (right). Director of Community Relations and Patient Experience at Phoebe Sumter Medical Center, is presented with an award of appreciation for his work as the Liaison for the Phoebe Sumter Auxiliary (PSA). Frances Bass (left), the PSA President, is presenting Johnson with the award.
Photo by Ken Gustafson

One example that Holloway gave of Johnson’s contributions was being able to install an automatic electronic door connecting the waiting room of the Oncology Department to the patients’ examination room so that patients with wheelchairs could get through. “Marcus helped us to do that,” said Holloway. “He also encourages us. When we have a big event going on, he sends out emails to the hospital staff and lets them know about our jewelry sales and, just recently, the reopening of our gift shop,” continued Holloway.

“I just want to say thank you,” said Johnson. “I have a lot of different activities and jobs that I do, but I would say the one that I really enjoy the most is working is working with the auxiliarians. It’s like having a lot of grandmothers and grandfathers. I’m a grandma’s kid, so that’s right up my ally.”

Holloway went on to say that the PSA nominated Johnson for the Director of Volunteer Services Award, but stated that the COVS awards chairman told her that Phoebe Sumter almost had a clean sweep and that it was just a point or two difference between Johnson and the winner. “We were really proud of him too and we just want to say that,” said Holloway.