Americus-Sumter sophomore quarterback Cameron Evans prepares to throw a pass as he is protected by his offensive line. Photo by Ken Gustafson

Panthers get manhandled by Hardaway in season opener

COLUMBUS – There were some who thought this day would never come, but for the Americus-Sumter High School football team (ASHS), it finally did. After a long summer full of uncertainty, which included suspensions of summer practices due to the COVID-19 pandemic, the Panthers finally strapped it on for real on Thursday night, September 10. On that evening, they opened the season at Kinnett Stadium in Columbus against the Hardaway Hawks (HHS), but the outcome did not go the Panthers’ way. The Hawks stifled the ASHS offense all night and scored on several big plays to hand the Panthers a 33-3 defeat.

The ASHS offense struggled to run and pass the football throughout the entire game and that nullified several offensive drives. As a result, the ASHS defense was on the field much too long and was not able to keep the HHS offense in check.

In spite of the loss, ASHS Head Coach Ross Couch was extremely pleased with the play of one particular Panther: senior punter and kicker Alex Vasquez. Couch remarked that Vasquez has improved a lot in his strength and flexibility over the summer and that his punting throughout the game was outstanding.

As far as the team as a whole was concerned, Couch pretty much stated that his club needs to improve in every facet of the game, both physically and mentally.

“We have to work on us, from conditioning to execution to handling adversity,” said Couch. “Defensively, we have to improve alignment and execution of the calls. Offensively, we have to get movement up front at the point of attack and execute our pass concepts when we are in those situations. We’ve got to be more efficient in our passing game by establishing the run.” 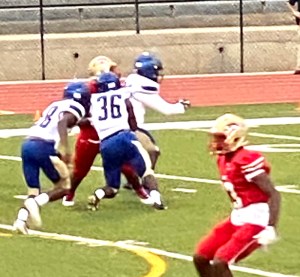 Americus-Sumter junior linebackers Marcus Douglas (36) and Trauntavious Robinson (28) try to bring down a Hardaway running back.
Photo by Ken Gustafson

Neither team’s offense could mount a scoring drive on their first possessions, but as the Hawks were about to punt, the ball was snapped over the punter’s head and recovered by the Panthers at the HHS 12-yard line. The Panthers had a golden opportunity to put points, but were unable to capitalize.

The ASHS defense forced the Hawks into a fourth down situation on their next possession and on fourth down, HHS shot itself in the foot with another bad snap over quarterback DJ Lucas’s head. As a result, the Panthers were given excellent field position and were given another opportunity to score. However, the Panthers struggled to run the ball against the HHS defense and they were forced to punt.

Later on in the first quarter, the Hawks were pinned back at their own six-yard line, but Sayvion Fuller made a huge play by running the ball all the way down to the ASHS 27-yard line. Fortunately for ASHS, the Panther defense came up with three big stops. On fourth and nine from the ASHS 26, the Hawks decided to go for it, but Lucas’s pass was incomplete and the Panthers took over on downs. 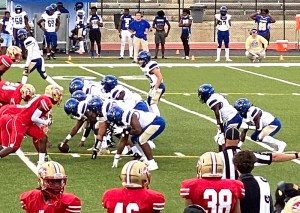 ASHS quarterback Cameron Evans is under center and about to run a play on offense.
Photo by Ken Gustafson

Once again, however, the offense sputtered and the Panthers were forced to punt, but a special teams error hurt ASHS as well, as the ball was snapped over Vasquez’s head and recovered by the Hawks. A few plays later, Fuller was able to score the first touchdown of the game from four yards out. The extra point attempt was unsuccessful, but HHS led 6-0 with 1:34 to go in the first quarter.

The Panthers were able to put points on the board before halftime, as they were able to move the ball down to the HHS 16-yard line. However, they had to settle for a short field goal from Vasquez with 7:22 left in the half.

On the Hawks’ next possession, they were able to get their running game going, as they were able to move the ball down to the ASHS 29. Then Lucas threw a short pass to J.Q. Hardaway, who ran the ball into the end zone to give the Haws a 12-3 halftime lead.

HHS got the ball to start the second half, but the Panthers were able to hold and ended up getting the ball back at their own 32-yard line. ASHS was able to move the ball down to the ASHS 44 yard line. However, on third and eight from the 44, quarterback Cameron Evans threw a strike to Kylan Carter, who dropped the ball. The play would have given the Panthers a first down in HHS territory, but instead, they had to punt. 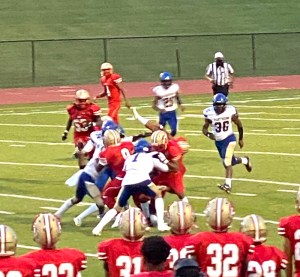 The Hawks were able to move the ball down to the ASHS 38-yard line, but an illegal shift penalty pushed HHS back five yards. However, on second and 15, Lucas threw a short pass to Fuller for 12 yards down to the Panthers’ 31. The Hawks kept using their running game to move the ball closer to pay dirt, as running back Kentavious Day was able to run the ball down inside the ASHS 10-yard line. However, on second down, the Panther defense made a big play, pushing the Hawks back 13 yards. Unfortunately for ASHS, that was not enough to stop the Hawks. On third and 14 from the ASHS 19, Lucas threw a pass to Fuller, who was able to find his way into the end zone for his second touchdown of the game. HHS decided to try a two-point conversion that was unsuccessful, but the Hawks owned a commanding 18-3 lead with a little over 11 minutes left in the game.

The Panthers were unable to mount a drive on their next possession and with a little over nine minutes left, the Hawks put the game away. On their next possession from the ASHS 44, Day broke free and scampered 44 yards down the sideline for a touchdown. Then with 6:50 to go, the Hawks added to their lead when Lucas capped off a 34-yard drive with a six-yard rushing touchdown. The extra point was good, making the final score 33-3 in favor of HHS.

The Panthers were supposed to open the season in Albany against Westover on Friday, September 4 and they were scheduled to host Monroe on Friday, September 18 in their home opener. However, due to the decision by the Dougherty County School System to suspend all fall sports until October, both of those games were canceled. As a result, the Panthers will have plenty of time to correct their mistakes and work on things. ASHS will not play a game until Friday, October 2 when they host Central (Macon) at Alton Shell Stadium. Kickoff for that game is scheduled for 7:30 p.m.