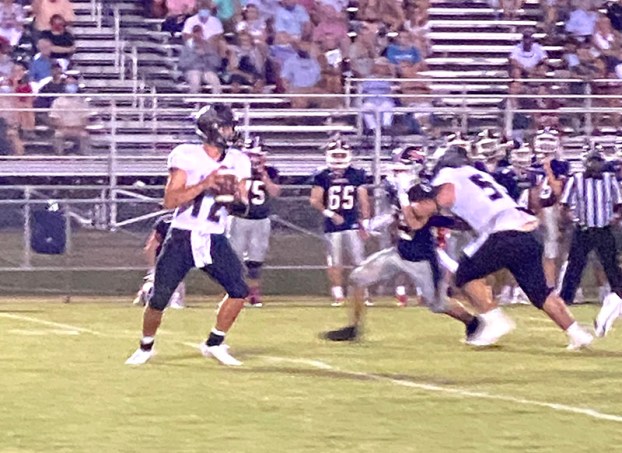 ALBANY, GA – Like all high school football teams around the state of Georgia, the Schley County Wildcat football team did what they had to do over the summer amidst the COVID-19 pandemic to prepare themselves for their season opener on Friday, September 4, at the Deerfield-Windsor School (DWS) in Albany. The Wildcats were prepared to give a cold Georgia High School Association (GHSA) Welcome to the Knights, but DWS had other ideas and put up a fierce fight. Fortunately for SCHS, their steady power I running game, along with the stout play of their defense, helped them earn a hard-fought 29-21 victory over the Knights at Webb Memorial Stadium on the DWS campus.

For the Knights, it was their first game as a new member of the GHSA. DWS has been a member of the Georgia Independent School Association (GISA) ever since it was founded in 1964.

While SCHS Head Coach Darren Alford was pleased to get a win to start the season, he knows that his club has a lot of things they need to clean up in order for them to get to where they want to be.

“We had a lot of mistakes….lots of first game jitters,” said Alford. “We played well enough to win. We were sloppy in a lot of areas. We have to work on our execution on offense. We had way to many missed assignments. We will continue to work and get better. Just thankful we got to play tonight.” 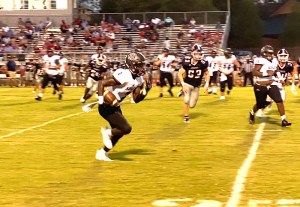 The Knights won the toss, but deferred until the second half. That gave the Wildcat offense the opportunity to exert its will early, which it did. 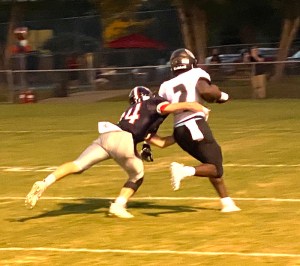 Led by Long, Solomon and Renfroe, SCHS moved the ball down inside the 35-yard line. However, the drive bogged down as the Wildcats failed to convert on fourth and four and the ball went over to the Knights on downs.

However, the Wildcat defense was up to the task. They stopped DWS on offense, forcing the Knights to punt. However, DWS punter Garrett Watson had his punt blocked by Tyler Vickery, giving SCHS great field position near the DWS 27.

This time, the Wildcats were able to capitalize. They moved the ball down inside the five-yard line and on first and goal from the two, Long scored on a quarterback sneak. The extra point attempt by Aaron Pinckard was unsuccessful, but SCHS had an early 6-0 lead. 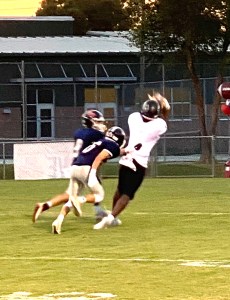 As they had done for much of the first half, the Wildcat defense stopped the DWS offense, but the Wildcats were unable to get anything going on their next possession and were forced to punt. However, on fourth down and 11, a bad snap forced SCHS punter Luke Forehand to try and run for the yardage, but he was tackled short of the yard to gain by Smith Bettis. This gave the Knights a golden opportunity to put points on the board. DWS quarterback Thomas Ray ran a quarterback keeper down inside the SCHS 20-yard line. Then a couple of plays later, Ray scored on another quarterback keeper to put DWS on the scoreboard. The extra point by Waylon Marbury was good and by halftime, the Wildcats’ lead had been trimmed down to 13-7.

The Knights got the ball to start the second half, but the SCHS defense was once again up to the task, as they stalled the DWS drive. 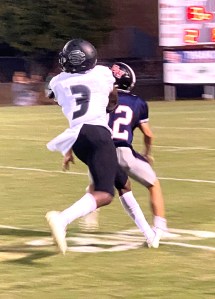 However, on the Wildcats’ first possession of the second half, Ross was injured and had to be helped off the field. The SCHS drive stalled and the Wildcats were forced to punt. Fortunately for Ross and his team, he was able to return.

This time, however, the DWS offense was on the move. On third and two from the SCHS 35, DWS running back Gleaton Jones ran the ball 12 yards down near the Wildcats’ 23-yard line. A couple of plays later, the Knights were able to gain first-down yardage at the SCHS 13. With 6:47 to go in the third quarter, DWS Head Coach Jake McCrae called a time out to set up a play. Out of the timeout, off sides was called against SCHS, which moved the ball down to the eight. Then on first and goal from the eight-yard line, Ray ran a quarterback keeper around the left side of the defense and scored. The extra point by Marbury was good and just like that, the Wildcats found themselves down 14-13 with 6:41 to go in the third quarter.

However, SCHS responded as Solomon ran the ball 57 yards on the ensuing kickoff, putting the ball on the Knights’ 39-yard line. However, on their first play from scrimmage, the Wildcats were called for holding and they were backed up to the 49 of DWS. 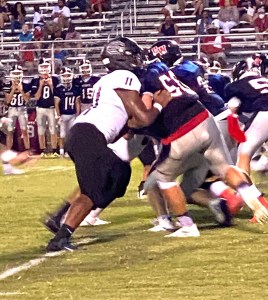 After SCHS called a timeout, The Wildcats faced first and 20 from the DWS 49, but Long was able to scramble for 23 yards and a first down at the Knights’ 26. On the next play, Renfroe ran the ball for two yards. Then on second and 10 from the 24, Renfroe bolted his way through the DWS defense down to the six-yard line.

However, a couple of plays later on third and goal from the five, Gleaton Jones came up big as he sacked Long, forcing the Wildcats to attempt a field goal.

Fortunately for SCHS, Pinckard’s short field goal attempt was good and the Wildcats regained the lead 16-14 with about two minutes left in the third quarter.

On the Knights’ next possession, the SCHS defense flexed its muscles again.

Long, who had just been sacked while in at quarterback, returned the favor on defense by sacking Ray for a 22-yard loss. That effectively stopped the DWS drive and the Knights were forced to punt. 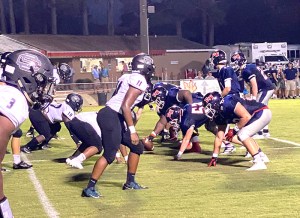 The Schley County defense played extremely well all night and ended up being a key factor in the win at Deerfield-Windsor. The Wildcat defense was able to make some stops and recovered a fumble at the end of the game to secure the victory.
Photo by Ken Gustafson

However, a special teams miscue hurt the Knights when the ball was snapped over the head of Watson, who fell on the ball at the 1-yard line. The Wildcats quickly took advantage, as Long scored on a quarterback sneak. Pinckard’s extra point was good and SCHS enjoyed a 23-14 lead early in the fourth quarter.

However, the Knights would not go away. They were able to move the ball down to the SCHS 15-yard line on their next possession. Then on fourth and inches from the 15, Ray was able to get the necessary yardage for a first down. Though the SCHS defense was able to force a third and 15 situation, Ray made a huge play for the Knights by throwing a 23-yard touchdown pass to Smith Flynn. Marbury’s extra point was good and the Knights only trailed the Wildcats 23-21.

Solomon made another long kickoff return for SCHS past midfield on the ensuing kickoff, giving the Wildcats good field position. However, the play of the DWS defense, coupled with a big false start penalty against the Wildcats, forced SCHS into a fourth and seven situation from the DWS 44. However, Long was able to find Ross on a short pass to convert the fourth-down play.

This proved to be a crucial play in the game, as the Wildcats were able to use their ground game to gain yardage and bleed the clock. 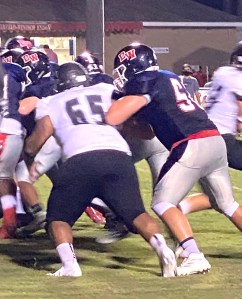 Schley County senior defensive tackle Dywon Hamilton tries to get in on a tackle.
Photo by Ken Gustafson

On first and 10 from the DWS 19-yard line, Renfroe ran the ball down to the 12-yard line with 2:29 to go in the game. Then on second and four, Renfroe gamed a couple of yards, moving the ball to the DWS 10 before the Knights called their final timeout.

Out of the timeout, the Wildcats were able to convert on third and one, making it first and goal from the six-yard line. However, a delay of game penalty was called on SCHS, which moved the ball back. Fortunately for SCHS, Solomon was able to run unmolested into the end zone for a touchdown. However, Pinckard’s extra point attempt was unsuccessful and it left the door open for the Knights, as they trailed 29-21 with 1:21 to go.

DWS was able to get decent field position on the ensuing kickoff, as they had the ball at their own 44. However, the SCHS defense made the play of the game. On first and 10 from the DWS 44, Ray’s pass was caught by Flynn, but he fumbled the ball and the Wildcats were able to recover it. SCHS was able to run out the clock and escape Albany with a 29-21 season-opening victory over DWS.

The Wildcats will have next week off and will host Wilcox County in their home opener on Friday, September 18, at 7:30 p.m. 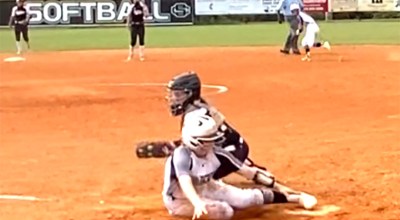 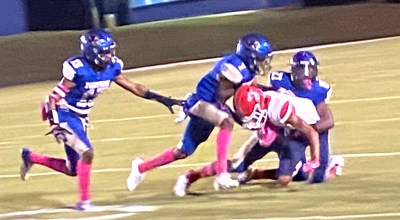