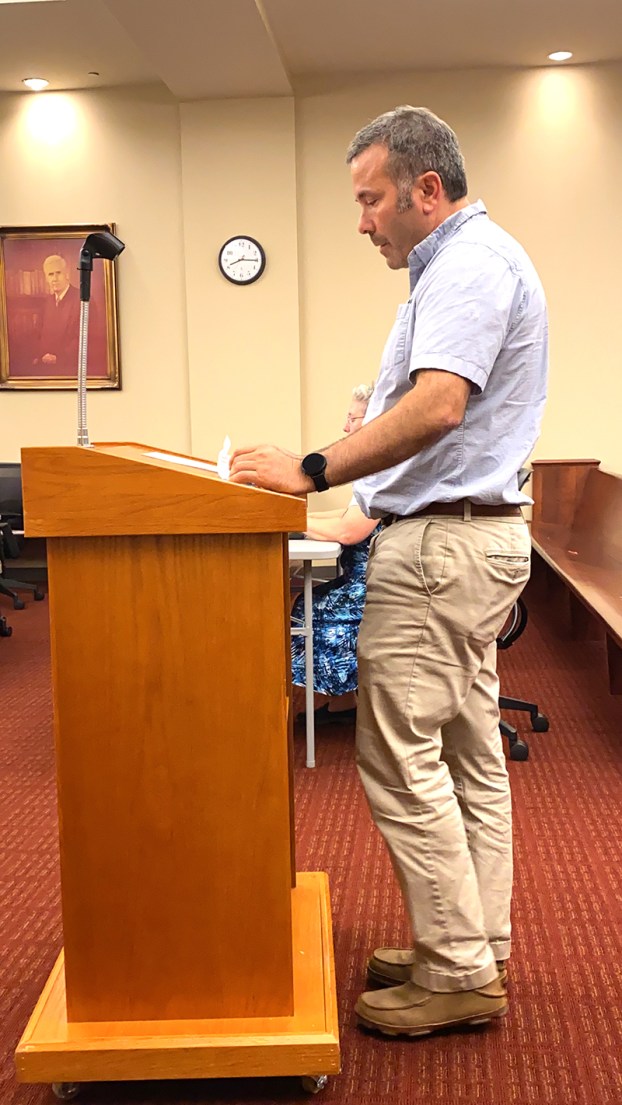 Sumter County School Board Chairman Dr. Michael Busman addresses the Sumter County Board of Elections at their meeting on Tuesday, September 1 and tries to make his case as to why he should not be disqualified from running for the school board’s District 6 seat. Photo by Ken Gustafson

AMERICUS – On Tuesday, August 4, the Sumter County Board of Elections (SCBE) held a Called Meeting. At that Called Meeting, the SCBE voted 3-1 to disqualify Dr. Michael Busman from running for School Board District 6. However, at a meeting of the SCBE on Tuesday, September 1, Dr. Busman tried to make his case before the Board as to why he should be allowed to run for the District 6 seat on the Sumter County School Board (SCSB).

The Sumter County School Board district maps were recently redrawn and as a result, Dr. Busman, who serves as the school board chairman, ended up being the incumbent of an at large district. However, according to Dr. Busman, Judge W. Louis Sands, the Senior US District Court Judge for the Middle District of Georgia, was recently tasked with drawing seven separate distinct districts, which he did.

“Even though I do live in District 5 on this new map, nobody was placed in District 6 and usually, it’s tradition, although whether it’s a law or not, I’m not familiar, but it is practiced that when new districts are drawn, incumbents are placed in their own district unless you shrink the size of the Board and that’s impossible for that to happen,” said Busman to the SCBE. Dr. Busman went on to say that when Judge Sands realized that there were two incumbents in the same district (District 5) and District 6 was left vacant, the judge issued an order in April saying that Dr. Busman is to be the incumbent in District 6. “His words were ‘until a successor is dually elected and qualified, Michael Busman is deemed to be the incumbent in District 6’, said Busman. “Once again, I don’t live in District 6, but I don’t write the laws either. I just try to follow them and that’s what the judge put in place.”

Busman went on to say that if he would have qualified in District 5, he fears that somebody could have argued that he was the incumbent in District 6 and, therefore, couldn’t run in District 5. “Why would he put me in a district that I could not run in,” said Busman. “I could currently finish out my term as an at large member of the county.” Busman continued by saying that the county has had several elections in the past that it believed were properly run, but were called off by a federal judge.

“I was just doing what the ruling said,” said Busman. He added that if there was a question as to whether or not the judge made an accurate ruling, it should have been challenged, but whether or not he (Busman) agreed with the ruling, he felt he had to go along with it.

Busman finished his remarks to the SCBE by asking them to take what he had said into consideration.

In a statement to the media, Sumter County Superintendent of Elections and Voter Registration Randy Howard acknowledged that Judge Sands made the ruling that Busman was referring to, but further stated that the order didn’t waive the legislative requirement that Dr. Busman must reside in the district in which he runs for office in the November school board election. Instead, it merely clarified that he would be designated from the current school board members to serve as the representative for the newly created District 6 until January 1, 2021, when the newly elected District 6 representative takes office.

“Judge Sands’ reference to Dr. Busman as the “incumbent” for District 6 does not waive the residency requirement for Dr. Busman to represent that district during the new term beginning January 1, 2021,” said Howard. “An incumbent is not automatically qualified to run for re-election in that same office, and Judge Sands’ multiple orders in the case are abundantly clear that each new district must be represented by someone who resides within that district. The Board of Elections and Registration confirmed with both the County Attorney and the election lawyers representing it in the Wright litigation that their interpretation of Judge Sands’ order is accurate.”

In other words, in order for Dr. Busman to be qualified to run for the District 6 seat on the Sumter County School Board, he must be a resident of District 6.

At last Tuesday’s meeting of the SCBE, Board Chairman James Gaston stated that at their Called Meeting on August 4, the SCBE had voted 3-1 to disqualify Dr. Busman from running in District 6. Gaston asked members of the Board if there was a motion to reconsider or rescind that decision. No one made a motion to reconsider and, as a result, Gaston stated that the decision to disqualify Dr. Busman stands.