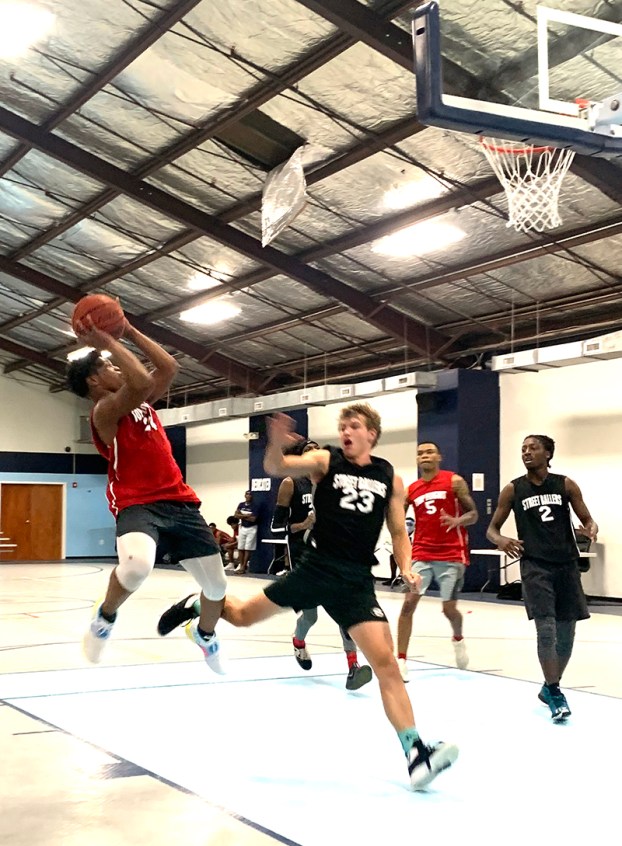 Top Flight’s L’Shannon Ross goes up to score while being guarded by Max Foster of the Street Ballers. Ross scored 25 points to help lead Top Flight to a 99-88 win over the Legends in their second game on Sunday in the SCPRD Adult Summer Basketball League. Photo by Ken Gustafson

AMERICUS – Down by as many as 17 points in the second half, the Top Flight team was able to overcome its deficit and engineered a come-from-behind 88-85 victory over the Street Ballers in the Sumter County Parks and Recreation Department (SCPRD) Adult Summer Basketball League on Sunday, July 19, at The Columns at Boone Park.

This league, which began play on Thursday, July 16, is an adult recreational basketball league that was started by the SCPRD for men ages 18-25. The league consists primarily of former local high school and college players.

The Street Ballers (STB) jumped out to a 22-7 lead early in the first half and dominated their way to a 44-32 halftime lead. Former Americus-Sumter player Mike Flemmings led STB with 12 first-half points and former Southland Academy and Brewton-Parker College standout Mike Volley scored 10 points in the first half. For Top Flight (TF), they were led in first-half scoring by Stepfon Luster with nine points. Shomari Gaines also chipped in seven first-half points for TF. 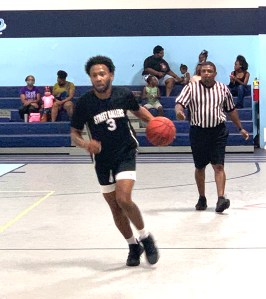 Former Southland Academy and Brewton-Parker College standout Mike Volley led the Street Ballers with 19 points, including a five pointer, in their loss to Top Flight on Sunday, July 19, in the SCPRD Adult Summer League.
Photo by Ken Gustafson

During the first seven minutes of the second half, STB still controlled the game as Jaquan Leverette nailed a three-pointer to give his team a 60-44 lead. However, as the second half continued, the tide began to turn in favor of TF.

With 5:25 to go in the game and TF trailing 77-64, another Americus-Sumter product, L’Shannon Ross, knocked down a three-pointer to bring Top Flight to within 10 points. This was the beginning of a 20-6 run by TF, which included a five-pointer made by Luster. Luster would later nail a three-pointer to give Top Flight an 84-83 lead and cap off that momentous 20-6 run.

Eric Brown would later knock down two foul shots to give TF and 86-83 lead, but Albert Davis would later hit two free throws of his own to bring STB to within two at 87-85.

Scott Sheffield of the Legends is seen here going up for a rebound. Sheffield scored 26 points in the Legends’ 99-88 loss to Top Flight.
Photo by Ken Gustafson

However, the Street Ballers were not able to save themselves and Top Flight was able to win their first game of the day by the score of 88-85.

Luster led all scorers with 34 points, including a five pointer and a three pointer. Former Americus-Sumter and Georgia Southwestern State guard Eric Hall scored 16 points. Shomari Gaines poured in 14 and Kevin Stone chipped in 11 in the winning cause. 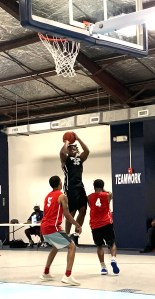 Mike Flemmings (35) goes up to take a shot against Top Flight. Flemmings scored 16 points in the Street Ballers’ 88-85 loss to Top Flight.
Photo by Ken Gustafson

Mike Volley led the Street Ballers with 19 points, including a five pointer. Mike Flemmings poured in 16 points and Jontavious Jernigan chipped in 14 in the losing cause.

On this particular day, it was Top Flight’s turn to play a second game and they showed no ware or tare against the Legends. They were able to win their second game by the score of 99-88.

Ross poured in 25 points to lead TF and Hall scored 21. Luster poured in 18 points and Gaines chipped in 14 in the winning cause. As for the Legends, they were led in scoring by Scott Sheffield with 26 points.