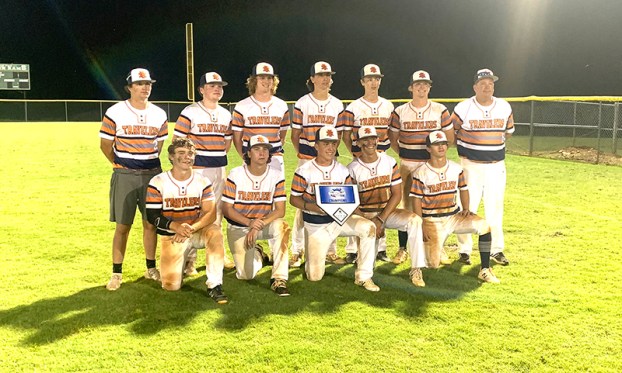 LOGANVILLE, GA – This past weekend, the 15U Americus Travelers baseball team (ATB) proved why they are one of the best youth travel baseball teams in the state of Georgia when they made their third trip this month up to the Atlanta metro area and won the Grand Slam June Jam summer tournament at Bay Creek Park in Loganville, GA.

According to ATB head coach Tim Estes, his club is playing superb baseball and they’re doing it at the most important time of the season against top-notch competition.

“It’s good to get to play competition like that…kind of a measuring stick to see where we were and to be able to beat two good baseball teams with quality pitching shows me that these kids have already matured throughout this season,” said Estes.

The Travelers were able to make it to the tournament semifinals on Sunday, June 28. In the semifinals, they had to come from behind to beat the Loganville Five Star Generals by the score of 7-5. Then in the championship game, they defeated the Decatur Devils 9-4 to claim the tournament championship.

ATB began the pool play phase of the tournament on Saturday, June 27 by winning their first game in dominating fashion. They defeated the Georgia Lookouts by the score of 21-0, as Landon Kight and Gavin Lacey combined to pitch a no hitter and struck out a total of six batters.

Chase Ledger, who plays his high school ball at Southland Academy, led the Travelers’ offensive attack by going 2 for 4 at the plate with a home run, four RBIs and two runs scored. Owen Lamb also had a strong game at the plate. The Schley County High School product went 2 for 4 with three RBIs and three runs scored. In total, the Travelers scored 21 runs on 11 hits and committed no errors, while the Lookouts went scoreless and hitless and committed three errors. 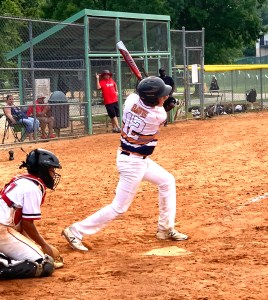 Americus Travelers right fielder Dylan Davis drove in two runs to help lead his team to a 7-5 come-from-behind victory over the Loganville Five Star Generals in the semifinals of the Grand Slam June Jam tournament in Loganville, GA.
Photo by Ken Gustafson

Game 2 was a much different type of game for the Travelers, as they were locked in a low-scoring pitchers’ dual against the Medlock Monarchs, a team they had shut out 6-0 a week ago at the Training Legends Blowout tournament in Powder Springs, GA.

In the bottom of the second inning, Thomas “Chewy” Willis led off with a walk and both Lamb and Kight were hit by pitches to load the bases for Dylan Davis. Davis grounded into a fielder’s choice, scoring Willis from third to give the Travelers a 1-0 lead. The Monarchs scored two runs in the top of the fourth to take the lead, but the Travelers responded in the bottom of the sixth when Kight drove in Ledger on an RBI single. Neither team could break through in the seventh and the contest was ruled a tie. 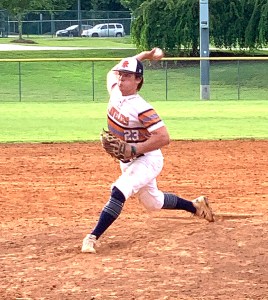 Americus Travelers pitcher Chase Ledger had a total of 10 strikeouts in three games pitched at the Grand Slam June Jam summer tournament. Ledger was able to strike out the last batter in the championship game against the Decatur Devils to secure the tournament championship for the Travelers.
Photo by Ken Gustafson

Thomas Ray, who plays his high school baseball at Deerfield-Windsor in Albany, GA, started on the mound for ATB. Ray gave up no runs and struck out four hitters in three innings of work. Caden King came on in relief of Ray. King gave up two runs on two hits, walked two and struck out five.

As the knock out stage of the tournament began on Sunday, June 28, the Travelers found themselves as the No. 3 seed out of their pool. They began the day by facing the Tri-City Generals from Columbus, GA and wasted no time by taking control of the game early. The Travelers scored three runs in the first, four in the second and three more in the third to secure a 10-0 shutout victory.

Tripp Thomas, Chase Ledger, Owen Lamb and Caden King each had a double in this game. King drove in four RBIs to lead the team in that category, as he went 2 for 2 with two runs scored. 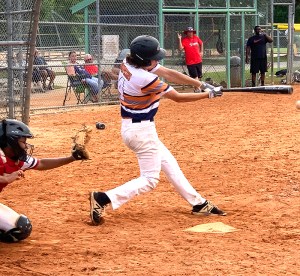 Americus Travelers third baseman Peyton Tompkins went 1 for 2 at the plate with three RBIs in ATB’s 21-0 shellacking of the Georgia Lookouts at the Grand Slam June Jam summer tournament.
Photo by Ken Gustafson

The victory put the Travelers into the semifinals on Sunday. They would be facing one of the best teams they’ve faced all year: the Loganville Five Star Generals.
For the first three and a half innings of the ball game, it appeared that the Travelers had met their match. The Generals took the lead in the top of the first inning by scoring two runs on two hits. For the first three innings, the ATB offense struggled against the Generals’ starting pitcher Deion George. They were only able to get one hit off George: a single by Ledger in the bottom of the first inning.

However, the tide began to turn in the bottom of the fourth inning. With the Travelers trailing 3-0, Landon Kight, who plays his high school ball at Fitzgerald High, led off the inning with a single. After George walked Owen Lamb, Tripp Thomas laid down a sacrifice bunt, moving the runners to second and third with one out. Gavin Lacey flew out for the second out, but Dylan Davis came through with a two-run single to bring ATB to within one.

Then in the bottom of the fifth, the Travelers tied the ball game on an RBI single by Caden King. Later that inning, they would take the lead when Willis reached on an error that allowed King to score. ATB added two more runs when Kight drove in an RBI and Ledger stole home. The Travelers added one more run in the inning when Thomas drove in Kight on an RBI single. That would be all the offense ATB would need to seal the victory. 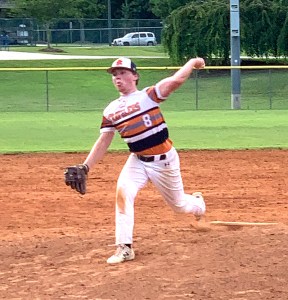 Americus Travelers pitcher Landon Kight is seen here in action. Kight and Gavin Lacey combined for a no hitter in the Travelers’ 21-0 win over the Georgia Lookouts in the Grand Slam June Jam summer tournament.
Photo by Ken Gustafson

The Generals threatened in the top of the sixth by scoring two runs, but Ledger was able to get Jaylin Jones to fly out to center field to end the game.

Both Ledger and Kight went 2 for 3 at the plate to lead ATB’s offensive attack and Davis went 1 for 2 with two RBIs.

Owen Lamb started on the mound for the Travelers and pitched the first four innings. He gave up three runs on five hits, walked four and struck out one.

Landon Kight came on in relief of Lamb and gave up two runs on one hit in one inning of work. Ledger was the final ATB pitcher of record in this game. He gave up no runs on one hit, walked one and struck out two.

With the win, the Travelers advanced to the championship game against the Decatur Devils, who defeated the Monarchs 7-6 in the other semifinal. 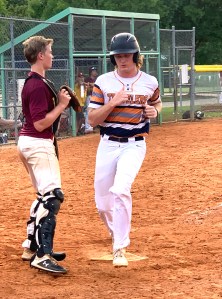 Thomas “Chewy” Willis scores a run in the Travelers’ 9-4 championship victory over the Decatur Devils. Willis went 1 for 4 at the plate with an RBI and a run scored.
Photo by Ken Gustafson

The Travelers quickly jumped out to a 3-0 lead in the top of the first inning, as they were able to take advantage of four walks. However, the Devils struck back with two runs in the bottom half of the inning on RBI singles by Will Moreman and David Welsh. The Travelers countered with another run in the top of the second when Ray belted an RBI double into center field, scoring Dylan Davis.

Each team scored a run later on in the game to make the score 5-3 in favor of ATB, but the Travelers took control in the top of the seventh. They scored four runs on four hits, including an RBI double by Kight. Those four runs would be enough for the Travelers to secure the victory and the tournament championship.

The Devils tried to mount a comeback in the bottom of the seventh, as they scored a run off an RBI single by A.J. McDowell. However, Ledger was able to secure the victory by striking out David Welsh to end the game.

Ray, Ledger and Lamb each went 2 for 3 at the plate and drove in a combined five RBIs for ATB. In total, the Travelers scored nine runs on 10 hits and committed two errors, while the Devils scored four runs on nine hits and committed no errors.

Up next for the Travelers is their final tournament of the season. In two weeks, they will travel to Myrtle Beach, SC to compete in the Top Gun Summer Nationals Friday through Sunday, July 10-12.