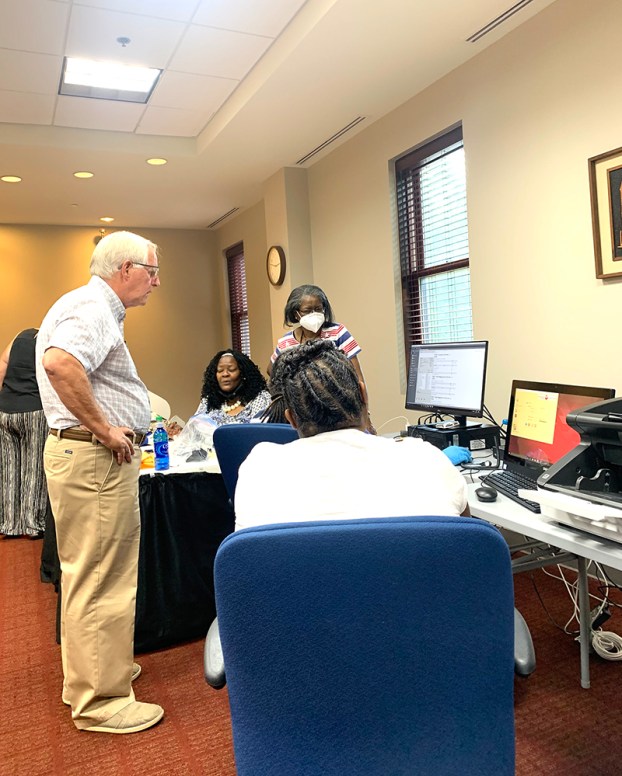 Poll workers at the Sumter County Courthouse still at work on Wednesday afternoon counting up all of the votes a day after Tuesday, the day of the Georgia Primary. Photo by Ken Gustafson

AMERICUS – It took much longer than anticipated. Once the polls in Sumter County closed at 7 p.m. on Tuesday, June 9, poll workers faced the lengthy and unenviable task of counting up all of the ballots to determine the election results in the Georgia Primary, which was postponed until June due to the Coronavirus Pandemic.

From Tuesday night all the way into Wednesday afternoon, poll workers worked non-stop to tally up all of the results and to make sure that it was done correctly. They faced many of the same problems that other counties throughout the state were facing.

According to numerous published reports, election chaos reigned in Georgia on Tuesday. According to one report in the Atlanta Journal and Constitution, poll workers were unprepared for the election, as they were using new voting computers during the COVID-19 Pandemic. Workers also had trouble getting voter machines to work and, as a result of the social distancing requirements brought about by the pandemic, there were long lines in which voters waited for hours to cast their votes.

According to Sumter County Board of Elections (SCBE) Supervisor Randy Howard, the main issue that was the overarching problem Tuesday night here in the county was the COVID-19 Virus. Howard noted that the primary elections, especially the Presidential Primary, were originally scheduled months ago, but were postponed because of the Coronavirus Pandemic. This forced counties and municipalities across Georgia to try to conduct elections in an environment in which social distancing and sanitization were of extreme importance in slowing down the spread of COVID-19.

Here in Georgia, Tuesday, June 9, was the date chosen to reschedule the primary elections from the Presidential Primary to local elections. For Howard and his staff, the challenge was conducting the election process with as few discrepancies as possible, while at the same time enforcing the CDC guidelines to protect the poll workers and voters of Sumter County from the virus.

“When we did this, it took us a while to go back in to do our polls and then figure out how we are going to do this,” said Howard. He went on to say that they made sure that the polls were totally sanitized and that the poll workers wore masks and gloves and practiced social distancing. “We also went in and disinfected a lot of these precincts beforehand,” said Howard. “We took a lot of effort and went far with this stuff and I think it worked out pretty well.”

However, Howard went on to say that things got much more difficult for him and his staff when Georgia Secretary of State Brad Raffensperger sent out 6.7 million absentee ballots when the state was not prepared to take care of that issue. “When they did that, they turned around and sent them only to the addresses where people live at and a lot of folks do not get their mail where they live and that created another issue,” said Howard. “And then what they did, they said that you could apply by email too.” Howard went on to say that as a result of that decision, he had literally over 400 emails and, as of Wednesday afternoon, was still receiving emails asking for applications for absentee ballots.

Howard stated that things were constantly changing not only be cause of the Coronavirus, but also due to the fact that absentee ballots can greatly be used for voter fraud. Howard also stated that due to the confusing process of sending and receiving absentee ballots, as of Tuesday, a lot of people had not received their absentee ballots from the state. He added that in the future, in his opinion, the counties should handle the absentee ballots. “It’s been a real big mess,” said Howard. “I understand the objective of people not having to go to the polls to vote if they don’t want to, but there are opportunities for corruption.”

Howard stated that he thought that moving the early voting out of the Sumter County Courthouse and over to the Griffin Bell Conference Center due to COVID-19 was a good decision because it allowed for more space and voters didn’t have to deal with going through courthouse security. Howard also stated that they plan to use the Griffin Bell Conference Center as one of the precincts where people can go to do early voting. “We’ll keep it there as long as Georgia Southwestern allows us to use it,” said Howard. “It’s just a much better and simple way to run it.”

As far as the local elections were concerned, one of those elections was the race for County Commissioner in District 5. Up until Tuesday, that seat was held by Democrat Thomas Jordan. However, Jordan’s Democratic challenger, Jessie L. Smith Jr., won the election by 89 votes. “I’m ready to go to work and make a difference in the county,” said Smith. “I want to thank the people for voting for me.”

Early voting for the general election on Tuesday, November 3, will begin on Friday, October 30.