Local High School sports teams will be allowed to… 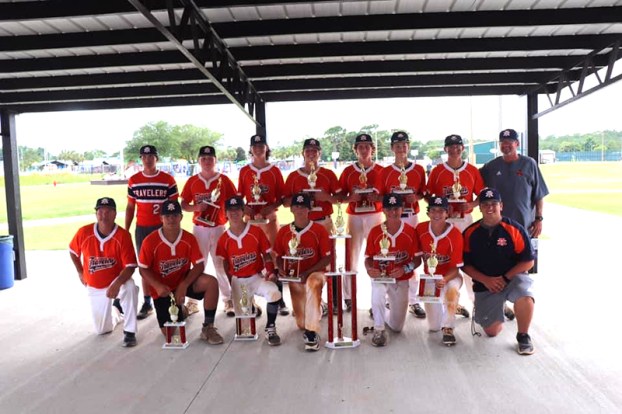 The Americus Travelers Baseball Team will be able to play an abbreviated schedule of baseball games this summer in spite of the COVID-19 pandemic. Photo by Angel Lamb

AMERICUS – While Major League Baseball, College Baseball, High School Baseball and most recreation leagues have been cancelled due to Covid-19, baseball will return to Georgia this summer.

Summer baseball travel organizations are finding a way to comply with the social distancing measures and experience a shortened season. One of the teams in our area that has plans to begin their 2020 summer season in the coming days is the Americus Travelers 15U Baseball Club. Founder and Head Coach Tim Estes recently made the announcement that his squad will compete in four tournaments this summer, including one regional and one National event.

“We were originally scheduled to play in seven tournaments throughout the southeast, but both of our tournaments in the month of May were cancelled and our first tournament in June was cancelled as well,” said Estes.

The 2020 version of the Travelers will return 10 players that made it all the way to the Grand Slam World Series Championship game last summer. The team is made up of players from several local high schools, including Southland Academy, Schley County, Lee County, Crisp County, Deerfield-Windsor and Fitzgerald. These same kids have played together on the Travelers for the past two seasons and many of them have played together for several years prior to joining the Travelers team.

Former Travelers/Schley County catcher Jarrod Wall, who is Estes’ son-in-law, will be an assistant coach. Estes will also have on his staff former Traveler/Schley County and recent GSW signee Reid Ragsdale. Missing will be long-time assistant coach Jeff Fussell, who retired from coaching at the end of the 2019 season. The roster includes Southland Academy’s Chase Ledger, who is a right-handed pitcher, catcher and third baseman who hits for power and for average. Schley County’s Owen Lamb will be a third-year starter for the Travelers in both the outfield and at first base/ Lamb is capable of providing some innings on the mound as a left handed pitcher. Fitzgerald’s Landon Kight, who is the grandson of Larry and Sharon Williams of Plains, will provide depth for the squad. Kight can be used as a left-handed pitcher, outfielder and first baseman. For the past two seasons, Crisp County’s Dylan Davis had one of the top batting averages on the squad and is expected to see time in the outfield. Deerfield-Windsor’s Thomas Ray is a versatile athlete with tremendous speed. Defensively, Ray will play both in the middle infield and in the outfield and is capable of providing some offensive punch as well.

Thomas, who will hit in the leadoff spot, had a batting average of over .500 last season. He plays shortstop, third base and outfield, as well as providing relief innings on the mound. Lacey will play the catcher position, as well as in the outfield Lacey also provides speed on the bases. Willis is a guy with a really strong arm who will play in the Travelers’ outfield and be depended on to provide quality innings as a pitcher. He too hits with power and for a good average 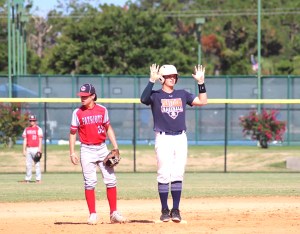 Americus Travelers right-handed pitcher Chase Ledger stands at second base after hitting a double during one of the team’s games last season.
Photo by Angel Lamb

King has been one of the Travelers top arms for the past two seasons. The tall, lanky right-hander spots the fastball really well, has good off-speed pitches and will see a good bit of time at second base as well. Tompkins is a first baseman/outfielder who may also see some relief innings on the mound and enters his third season as a part of the Travelers team.

“These 10 guys are so versatile and can do multiple things”, said Estes. “Our chemistry is good and we have a tremendous group of parents and grandparents that follow us. If we can stay healthy and pound the strike zone and do all of the little things that Travelers baseball has become known for, I like our chances. In this type of short season, experience will play an even bigger role in our success”.

The team will travel to Valdosta this coming Saturday to take part in a three-team double header. This will be in a controlled scrimmage type of setting and will include the Travelers, the Low Country Bombers and the South Georgia Sluggers. On Saturday, June 13 the Travelers will compete in the Training Legends Georgia State Tournament in Marrietta. Then they’ll return to Atlanta on Saturday and Sunday, June 20-21, for the Training Legends 42 Classic. Then during the weekend of June 26-28, the Travelers will make their way over to Savannah for the Top Gun Southeastern Regional World Series and will close out their season July 10 –12 in Myrtle Beach, South Carolina at the Top Gun Summer Nationals.

“I’m glad these guys are able to get in at least a little baseball this summer” said Estes. “I hope that this will keep their skills sharp and continue to improve their baseball IQ so that they can help their high school teams next spring”.

Information on the Americus Travelers can be found on their website at www.americustravelers.com.