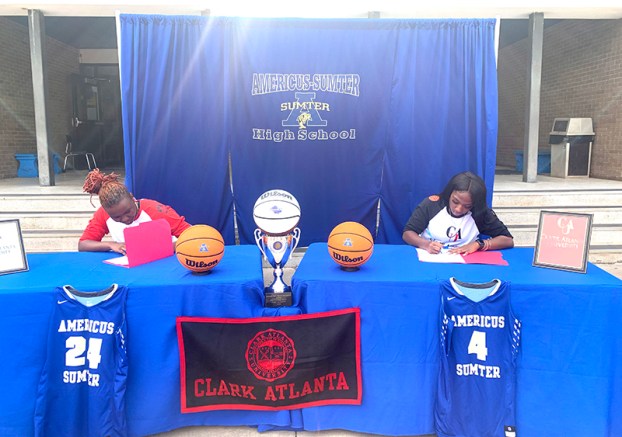 Both Jones and Pope played key roles in leading the Lady Panthers to the 2020 Class AAAA State Championship. Having been teammates in high school, they will continue that camaraderie at the college level when they suit up for the CAU Lady Panthers in Atlanta this fall.

Both Jones and Pope signed their letters of intent on Friday, May 15, in front of a crowd consisting of coaches, teammates, family and friends in front of the administration building at Americus-Sumter High School.

“First of all, I want to thank God because without Him, none of this would have been possible,” Jones told the crowd. “I would like to thank my teammates, my family members for pushing me to be great and to never settle for less.”

CAU is an NCAA Division II school and is a member of the Southern Intercollegiate Athletic Conference (SIAC), which includes schools such as Savannah State, Miles College and Fort Valley State. Jones was recruited by every school in the SIAC, but decided to settle on CAU.

Jones will certainly be a welcomed addition to the CAU Lady Panthers, who finished the 2019-2020 season with an 8-19 record. During her senior year at ASHS, Jones averaged 15.2 points per game, four rebounds per game, 4.5 assists per game and three steals a game in leading the ASHS Lady Panthers to the state championship.

While Jones is excited about playing college basketball, she is also excited about studying Criminal Justice, which will be her major at CAU. After her college career is over, Jones would like to be a probation officer. 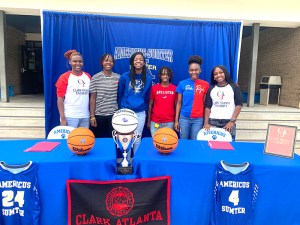 ASHS Head Coach Sherry Harris told the crowd that she has known Jones since the days she coached former ASHS star A’tyanna Gaulden. “Eight, nine years old. I remember seeing her (Jones) down at Florida State Basketball Camp, traveling with her father’s AAU team…She’s always been a student of the game,” said Harris. “This past year, she decided to come over and help us out and we appreciate it.” In 2019, Jones transferred to ASHS from Fitzgerald High School for her senior year.

Jones will be joined in Atlanta with her ASHS teammate, Brianna Pope. Pope spent all four of her high school years as an ASHS Lady Panther. During her senior year, Pope averaged 5.9 points per game and 5.4 rebounds per game.

“She’s been in our summer program ever since she left sixth grade, which was my first year here,” said Harris. “It’s kind of good when they sign a scholarship.”

Like Jones, Pope was recruited by several schools in the SIAC, along with other HBCUs, but in the end, she chose CAU. “I have family there so there is a big support system and it’s a great school”, said Pope. She will be majoring in Sports Medicine with connections with Emory University. After graduation, Pope plans to go to Grad School in order to become an athletic trainer.

“First of all, I just want to thank God because without Him, this wouldn’t be possible,” Pope told the crowd. “It’s been a long process so I want to thank my mom and my brother for being with me throughout the whole process.” Pope went on to thank Coach Harris and the rest of the coaching staff for pushing her and supporting her throughout her four-year career at ASHS.

“Both of these ladies are going to do great things for Clark Atlanta,” said Harris. “I’ve already put your names out there. We’ve got a lot of alumni in Atlanta. They’re going to take good care of you guys,” Harris told both Jones and Pope.

Perhaps ASHS Athletic Director Coleman Price summed it up the best when he told the crowd assembled that Clark Atlanta is not just getting two great athletes, but two great students as well.