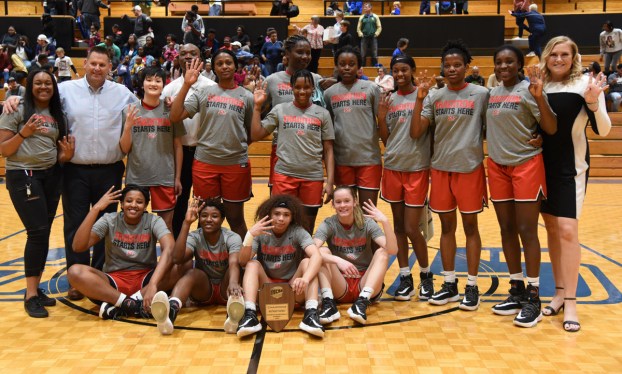 The South Georgia Technical College Lady Jets win the District J Championship game in Spartanburg, SC and earn the right to advance to the national tournament for the fourth consecutive year. Shown above are the Lady Jets holding up four fingers signifying their college’s four consecutive trip to the big dance. Photo by Su Ann Bird

“I was glad to see us come out and play with some intensity,” said SGTC head coach James Frey. “We haven’t started our last several games well, so it was important to do so today. Making a long road trip out of state, you’re never sure about how your team will respond, especially with so much at stake, but I was pleased with our effort.”

SMC scored first in the match-up and were able to pull ahead by as many as three points with 4:05 left in the first period. However, the Lady Jets came back and tied the game and at the end of the first quarter, the two teams had 19 points each. In that first half, the score was tied nine times and there were 11 different lead changes, but in the second quarter, the Lady Jets began to edge ahead and were up 41 – 34 at the end of the first twenty minutes of play.

The real difference in the game came in the third quarter when the Lady Jets held SMC to only nine points while running the court and posting 26 points of their own to pull ahead 67 – 43.  SMC was able to outscore the Lady Jets 22 – 18 in the fourth quarter, but by then, it was too little, too late.

Sophomore guard Shamari Tyson started for the Lady Jets but got into foul trouble early in the first quarter and only played five minutes in the entire first half.

“I felt pretty good when we were able to go up by seven at the half with limited playing time by Shamari,” said Frey.  “Moe Shida played a very poised 15 minutes in Shamari’s place in the first half and that was huge for us. She really stepped up when we needed her to.” 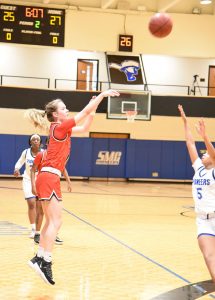 SGTC Sophomore Anna McKendree (14) led the Lady Jets in scoring with 26 points.
Photo by Su Ann BirdSophomores Anna McKendree and Yasriyyah Wazeerud-Din also stepped up in that first half. McKendree had 14 points at the half and made five of 10 shots from the field with three successful three-pointers. Yasriyyah Wazeerud-Den had eight points in the first half and scored the Lady Jets’ first points of the game.

“Anna McKendree has had great focus all week leading up to the game and shot the ball great in practice at SMC Friday night, so I wasn’t surprised when she played the best game of her career.  She had a true MVP performance when we needed it the most.  She shot it well, was able to get to the basket and finish, rebounded, and defended.  She was everywhere.  She picked a fantastic time to be at her best.  I am hoping she will continue to play this way out in Lubbock,” added Frey.

Coach Frey added that he is really excited to be taking this team to the national tournament. “This will be our fourth consecutive trip there and I am hoping familiarity will lead to success,” said Frey. “This is the most versatile team I’ve ever had with several ladies being able to play multiple positions. I think we have good depth in the post that could allow us to match up with the bigger teams we will see out there and I will stack our four sophomore guards up against anyone. They all can shoot it. They are smart and really love to get after you defensively.” 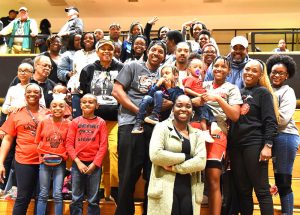 Niya Goudelock came to the Lady Jets from South Carolina and she brought a huge cheering section to Spartanburg SC to help cheer on the Lady Jets.
Photo by Su Ann Bird

One thing that Coach Frey wants to drive home to his team is that at the national tournament, everyone is good.  “We will make sure that our team understands that everyone out there is very good and if we don’t bring our A game it will be a short lived tournament,” said Frey. “Having six people on the roster who made the trip last year should be very beneficial. They know what to expect. They have been there and done it.”

And if the Lady Jets play with the intensity that they brought against SMC, it could turn out to be the best trip ever for any South Georgia Tech team. Only four times in nine trips have Jets or Lady Jets teams been able to post a win in their opening game.

Against SMC, the Lady Jets showed poise and intensity as four players posted double-figures. McKendree led the team in scoring with a total of 26 points. She had 14 in the first half and 12 in the second half. She had five of her team’s seven successful three-point shots. Sophomore Yasriyyah Wazeerud-Din had 14 points and then Shamari Tyson and Femme Sikuzani both added 10 points each.

“I am very proud of these young ladies. They have done everything that I have asked of them this season,” said Frey. “We set a goal at the beginning of the year to win the GCAA regular season. We did that and didn’t lose a single game. We wanted to win our region tournament and the District J championship so we could go to the national tournament. They accomplished that. Now we have set a goal to go out and win at the national tournament. How well we do will depend on how well we play. I believe this team could go all the way if we play and execute like we know we are capable of,” added Frey. Coach Frey went on to say that there are some really good teams in the tournament who they will have to beat and that those teams want to go all the way as well.

The Lady Jets will find out Monday between 11:30 and 12:30 where they will be seeded in the national tournament and who their first opponent will be. The tournament begins early Tuesday, March 17 and the last game will be at 9:30 p.m. Tuesday night. Only those teams who win or get a bye will advance to the Sweet Sixteen round on Wednesday.