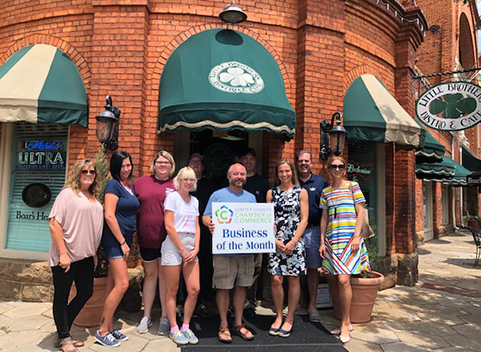 Now a fixture in downtown Americus, Little Brother’s Bistro began operations in The Maze when owner Steve Miller wanted something to do while considering his options. From those humble beginnings, and a short-term fix during a recession, developed into the popular Little Brother’s Bistro, and recently, Toboggan Steve’s, another eatery in the downtown area.

“We considered two strong community businesses this month, Arrow Exterminator and Little Brother’s Bistro,” said Amber DeBaise, head of the Chamber’s Business of the Month Division. “Both were selected because of their reputation and service to Sumter County.”

Miller said he has really enjoyed becoming a restaurateur in downtown Americus. “I know my customers, now my friends, and have met many people from all over the South, really, all over the world. You’d be surprised how many people visit Americus and stay at the Windsor Hotel.” Miller’s advice for other entrepreneurs is to “love what you do and make time for your family.”

Sumter County Chamber of Commerce nominates two deserving businesses monthly, and you can vote on the nominees on their Facebook page. “Every month, it was just difficult to narrow it down to one business,” said DeBaise. “It’s been a lot of fun to have the public participate in naming the eventual winner while also getting greater attention to both the businesses in the poll.”