Ken’s Column: Laziness is a cancer to the mind 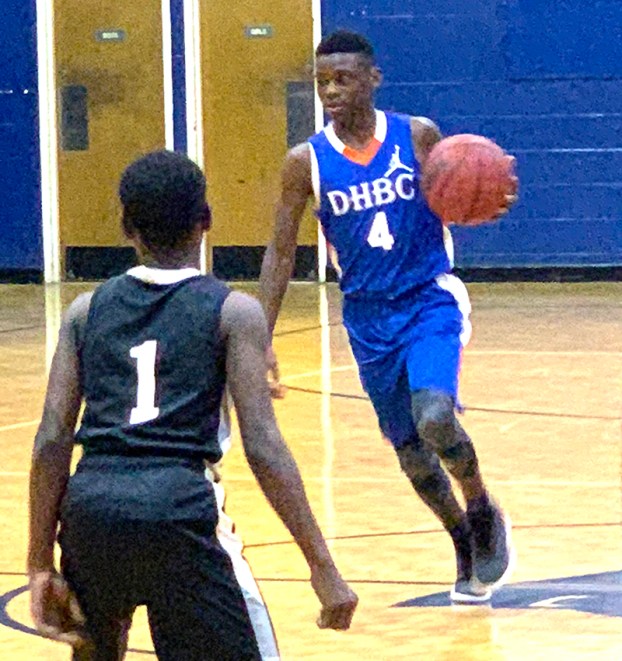 14u Thunder guard Cedric Smith directs the offense. Smith scored 13 points in the Thunder’s loss to the Raptors. Photo by Ken Gustafson

14u Raptors and Rockets earn solid victories in DHBCBL play

AMERICUS – Both the 14u Raptors and Rockets took control of their games early and didn’t let up as they went on to defeat the 14u Thunder and Warriors respectively Monday night, June 24, at the Americus-Sumter County Ninth Grade Academy.

It was the beginning of Week 4 of the Dwight Harris Boys Club Basketball League (DHBCBL).

The Raptors throttled the 14u Thunder 51-29 behind the double-digit scoring of both Cameron Evans and Devin Dowdell. Each had 11 points. The Rockets took a 52-38 lead over the Warriors in the second half of their game. While the Warriors made a comeback of sorts, they were not able to overcome their deficit and fell to the Rockets by the score of 67-59.

The Raptors jumped out to a 12-0 lead over the Thunder. However, the Thunder was able to cut the deficit to seven at 13-6. However, that would be as close as the Thunder would get for the rest of the game as the Raptors went on a 12-4 run to close out the first half, leading 25-10.

Tylek Luster (5) and Bryan Williams (30) go up for a rebound for the 14u Raptors.
Photo by Ken Gustafson

The Raptors continued their dominance in the second half by jumping out to a 30-12 lead on a free throw by Ja’Quavious Goober. The Thunder continued to struggle scoring against the strong defense of the Raptors. With 2:52 to go in the game, the Raptors built their lead up to 47-22 on two free throws by Kentravious Smith.

In addition to the scoring of Evans and Dowdell, Tylek Luster scored eight points and Goober had seven. Both Smith and Bryan Williams each scored six points and Thomas Glover scored two points to round out the Raptors’ scoring. 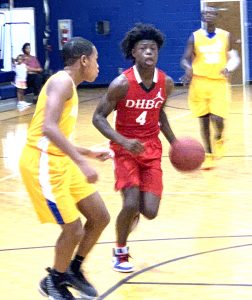 14u Rockets guard Tyquan Robinson scored 21 points to help lead his team to a 67-59 win over the Warriors.
Photo by Ken Gustafson

The Thunder also had two players score in double digits. Cedric Smith led all scorers with 13 points and Mike Terry had 12. Ashton Pope chipped in four points in the losing cause. 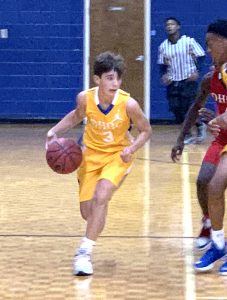 14u Warriors guard Eli Griffin with pushes the ball down the court.
Photo by Ken Gustafson

Led by high scorers Anthony Tyson and Tyquan Robinson, the 14u Rockets jumped out to a 52-38 lead in the second half. The Warriors went on a 6-1 run to close the gap at nine, but they were unable to get much closer as the Rockets won by the score of 67-59. Tyson led the Rockets with 23 points and Robinson scored 21 in the winning cause. Cordera Leverett scored eight points and his brother, Corderian Leverett, chipped in six points in the winning cause. 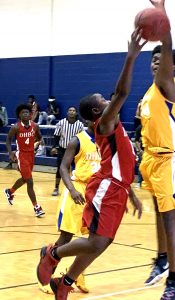 For the Warriors, Brandon Pope led all scorers with 34 points. Kadarius King scored nine points and Javin Lewis chipped in six points in the losing cause. 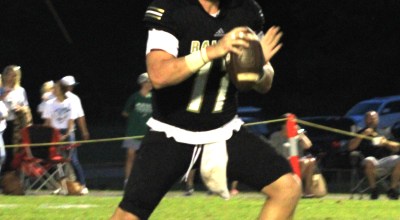