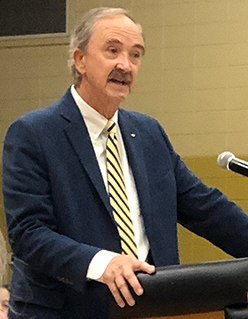 AMERICUS — With much fanfare and dignity, the Lower School of Southland Academy again gave tribute to veterans on Thursday with their annual program. The popular event is a highlight for the young students, faculty, staff and administration, and especially for the local veterans who attend.
Dressed in reds, whites, and blues, the students, from the itty-bitty kindergarteners up through the fourth graders, showed their respect with smiles and songs, all the while waving small American flags.
Featured speaker for the event was U.S. Navy Commander, retired, Herschel A. Smith III. Flying fighter planes from aircraft carriers, Smith served his country for 20 years, and returned to his hometown of Americus to live after his retirement as a Southwest Airlines pilot a few years ago.
Smith, in his remarks, gave a brief history of Veterans Day, which was formerly known as Armistice Day, celebrating its 100th anniversary on Sunday, Nov. 11. Looking out on the students when he took the podium, Smith remarked, “Wow. This is why America is great,” which drew a round of applause.
“Fifty years ago, 75 percent of the members of Congress were veterans; today only 20 percent are,” he said. “The number of veterans in the country has declined as well, from 20 percent of Americans to only 7 percent.”
Smith said it takes a “tremendous amount of support” for our military in all branches around the world to protect the United States. He recalled that during his time flying F-18s off aircraft carriers, his squadron had only 15 pilots, yet a typical aircraft carrier now has about 4,000 sailors and about 100 pilots. “We pilots couldn’t do our job if it weren’t for the support of all the others,” he said. “They were busy maintaining, refueling, rearming our Hornets. They were driving and navigating the ship. They were feeding, and performing all the other duties on a floating city.” He said the supporters behind the fighting segment of the military are “always the unsung heroes” in a successful military.

Bringing history closer to home, Smith mentioned the Doughboy statue from the World War II era as well as the fact that Souther Field, located at Jimmy Carter Regional Airport, was one of the first pilot training bases. He also encouraged students to visit Memorial Mile, a tribute to World War I veterans, located on U.S. Highway 19 North.
Smith said his late grandfather, Dr. Herschel A. Smith, was stationed as a physician in France during World War I, and showed his helmet which remains in the possession of his family. He also read an article published in the Americus Times-Recorder in 1919, announcing that his grandfather had returned home to Americus and his medical practice.
Smith asked the students what they did to honor veterans, besides thanking them for their service? He had a few suggestions: beginning every day with the Pledge of Allegiance to the American flag; stand and face the music, with hat off and hand over heart, when The National Anthem is played. He also asked that when they turn 18 that they register to vote and to always participate in each election.
Smith also shared a story about a Wisconsin sheriff who was retiring earlier this year and was going through some old keepsakes. He ran across some letters he had received while he had been serving in Iraq in 2003, in the National Guard. “These letters were special enough to Sheriff James Johnson that he still had them 15 years later,” Smith said.
The letters were addressed to “Dear soldier,” and one was signed by Chris Olsen, an elementary school student. After the sheriff posted the letter on the bulletin board at the sheriff’s office, one of the young deputies saw it. Deputy Chris Olsen couldn’t even remember writing it. The sheriff remarked, “Finding that letter after all these years and realizing the then-fourth-grader was now one of my deputies, seems like a unique coincidence but our lives are full of coincidences. We need to realize the impact a positive act can have on the lives of others.”
“It’s instances like these make the world seem small,” Smith said. “It’s America’s veterans who make the world much safer, from communism, fascism, imperialism, liberating slaves … or battling terrorism today, veterans have accomplished amazing things throughout our nation’s history.”
Throughout the ceremony, students were responsible for various portions such as the greeting everyone, the opening pray, singing patriotic songs, posting the colors, reading patriotic poems, and giving mementoes to veterans. The school band played patriotic songs; the Drum Line performed, and two buglers sounded “Taps.”