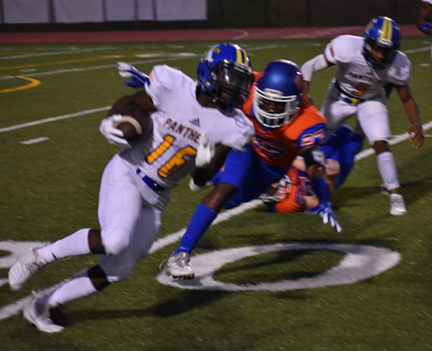 COLUMBUS – The Americus-Sumter Panthers lost their second region game in a row when they made their second trip of the season to Columbus, GA and fell to Blue Devils of Columbus 40-22 Friday night, October 5, at Columbus High School.

Things started out well for the Panthers as quarterback KJ Harvey completed a six-yard touchdown pass to Lemario Larry to give the Panthers a 7-0 lead with 7:57 to go in the first quarter.

Columbus struck again as the Blue Devils scored on a 35-yard touchdown pass. The extra point was no good, but the Blue Devils were within one, trailing 14-13. On the Blue Devils’ next possession, Quevolia Willoughby intercepted a pass with 4:37 left in the half. However, the Panthers were unable to capitalize on the interception.

With 1:29 left in the first half, Columbus took the lead on a six-yard rushing touchdown. The PAT was good, and the Blue Devils led 20-14 at the half. 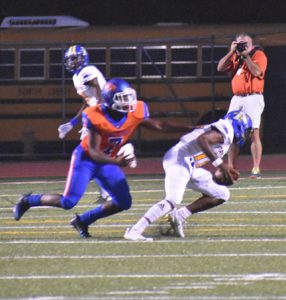 The Panthers tried to mount a comeback, but Harvey’s pass was intercepted. The Blue Devils cashed in on the interception by adding three more points on a 35-yard field goal. By the 4:35 mark of the fourth quarter, the Panthers were trailing 33-14.

The Blue Devil defense forced another turnover by the Panthers. This time, Harvey threw an interception that was run back for a touchdown. The extra point was good, and Columbus enjoyed a 40-14 lead. Americus-Sumter was able to get another touchdown before the game ended. Quevolia Willoughby caught an 11-yard touchdown pass from Harvey. Sam Crumbley scored on the two-point conversion attempt, but it was too little, too late as Columbus went on to win 40-22.

Americus-Sumter falls to 2-4 overall and 2-2 in Region 1-AAAA play. They will try to get back into the win column next Friday night, October 12, when they host another Columbus-area team and region opponent: Northside-Columbus. The Patriots (3-4, 2-3) defeated Dougherty 38-7 Friday night. Kickoff for next Friday’s game is scheduled for 7:30 p.m.