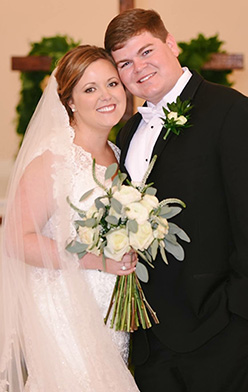 Abby Michelle Morgans of Leesburg, Georgia, and Carlton Robert Kite of Ellaville, Georgia, exchanged wedding vows on Nov. 18, 2017. Dr. Todd Sullens performed the wedding ceremony in Leesburg at the First Baptist Church.
The bride is the daughter of Mr. and Mrs. Michael Morgans of Leesburg. She is the granddaughter of the late Mr. and Mrs. John Meshanko of Albany, Ga., and the late Mr. and Mrs. James Morgans of Albany. She is a graduate of Lee County High School and a graduate of Georgia Southwestern State University with a bachelor of science in biology, and a member of the Kappa Delta sorority.
The groom is the son of Mr. and Mrs. Robert Kite of Cleveland, Tenn. He is the grandson of Mr. and Mrs. David Nelson of Montezuma, Ga., and the late Ruth Brazil of Americus, Ga., and the late Eugene Carlton Kite of Americus, Ga. He is a graduate of Schley County High School and attended Georgia Southwestern State University, where he is a member of the Kappa Sigma fraternity. He currently attends Albany Technical College and will graduate in May as a paramedic.
The bride was escorted and given in marriage by her father, Michael Morgans.
The bride wore an ivory gown by Mori Lee and an ivory cathedral veil by Mon Cheri. She carried a bouquet of polar star roses, white ranunculus, white veronica and silver dollar eucalyptus. For sentiment, she wore a diamond dinner ring passed down to her by her grandmother, Harriet Meshanko.
Rachel McDaniel of Alpharetta, Ga., was the maid of honor. Bridesmaids were Rylee Wilson of Panama City Beach, Fla., cousin of the bride; Robyn Kite of Blue Ridge, Ga., sister of the groom; Tori Duren of Adel, Ga.; Katherine Hutchins of Augusta, Ga.; Ansley Jones of Preston, Ga.; and Kristin Robinson of Locust Grove, Ga.; all friends of the bride. Flower girls were Olivia Waigand and Sara Liz Waigand of Blue Ridge, Ga., nieces of the groom.
The groom’s father, Robert Kite of Cleveland, Tenn., was the best man. Groomsmen were Bryan Keen of Soperton, Ga.; Adam Lundberg of Atlanta, Ga.; Drew Rico of Americus, Ga.; Dillon Still of Americus, Ga.; Cody Vickers of Americus, Ga.; and Josh Worth of Nashville, Tenn.; all friends of the groom.
The bridegroom’s grandparents, David and Sara Nelson, read scripture and shared sentiments during the ceremony.
Following the ceremony, a reception was held at the Ocala House in Leesburg, Ga. The newlyweds honeymooned in Jamaica. The couple is residing in Americus, Georgia. The bride is employed by Phoebe Sumter Medical Center. The groom is employed by Gold Star Ambulance.