Wildcats wrap up regular season with defeat of Hawkinsville,… 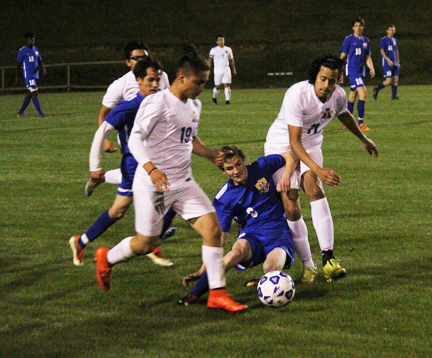 Michael Murray/Americus Times-Recorder: Members of the ASHS Panthers soccer team vie with Crisp County players for control of the ball during an early April region match in Americus.

BAINBRIDGE – The Americus-Sumter High School (ASHS) Panthers soccer team  wrapped up its regular-season schedule on April 21 with a 2-1 victory over the Bainbridge Bearcats.
With the win, the Panthers end regulation play with an overall record of 10-6 overall. The Panthers finished with an impressive 7-3 record in region 1-AAAA, which earned the team a spot as the fourth seed in first round of the state tournament, which began on April 26.
In their regular-season curtain-closer, the Panthers saw the Bearcats pull ahead 1-0 early in the first half on a penalty kick. Unwilling to let this minor setback keep them down, the ASHS boys came back and scored a pair of goals in the second half of the competition. Jonathan Abarca scored the first goal for the Panthers from outside the 18-yard box. Frankie Gonzalez then put the game away with a goal on a cross.
On the win, Panther head coach, Greg Fowler, told the Times-Recorder, “It was a very physical game. We played very well.”
The Panthers faced the Spalding High School Jaguars on April 26 in the first round of the state playoffs. The second round of the state playoffs is scheduled to begin on May 2.