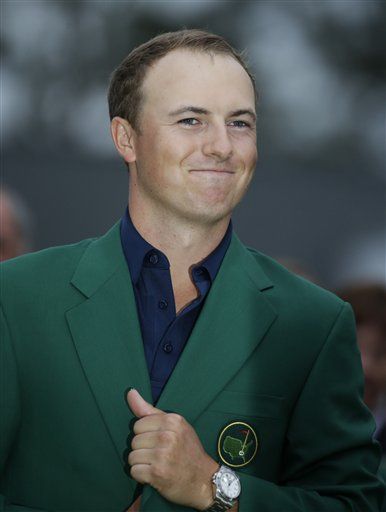 Spieth dominates a Masters that shows golf in good hands

Yet, not long after Spieth slipped on the green jacket at age 21, the second-youngest champion in the history of the Masters, he pondered what pushed him to one of the game’s greatest performances.

There was that runner-up finish in the 2014 Masters, when he had a two-shot lead with 11 holes to play but faded to a runner-up finish behind Bubba Watson. A fine showing, indeed, for someone so young playing Augusta National for the first time.

But it gnawed at Spieth.

“I was already hungry from last year,” he said. “I had an opportunity and watched it slip away.”

When he drove down Magnolia Lane this year, Spieth was even more ticked off. In his two previous tournaments, he finished second and lost in a playoff. Never mind that he had won right before those two close calls, stamping him as the hottest player on the PGA Tour.

That’s the thing about this generation of golfers.

It sure bodes well for golf in this inevitable changing of the guard, from players such as Mickelson and Tiger Woods — who aren’t done yet, by the way — to the youngsters like Spieth and 25-year-old Rory McIlroy, now 1-2 in the world ranking with five major titles between them.

Spieth, who was bothered by “having a chance to win the last couple of weeks and not quite pulling it off,” made everyone pay at the Masters.

Leading from start to finish, he began with an 8-under 64 for the lowest opening round at the Masters in 19 years, set scoring records for 36 and 54 holes, made a staggering 28 birdies (another tournament mark), and became the first player in Augusta history to reach 19 under when he rolled in a birdie putt at the 15th hole Sunday.

He sucked all the drama out of the final round, making sure no one got closer than three shots to the lead.

Spieth closed with a 2-under 70 to finish four shots clear of Mickelson and Justin Rose.

About the only thing Spieth missed was having the 72-hole record all to himself. He bogeyed the last hole to finish with at 18-under 270, tying Woods’ performance while winning his first green jacket in 1997.

“It all happened so quickly,” Spieth surmised. But he quickly added, “I feel ready to carry that baton.”

His victory sets up a tantalizing new rivalry with McIlroy in a sport that has always thrived on matchups, whether it was Hogan vs. Snead and Nelson; Nicklaus vs. Palmer and Watson; or Woods vs. Mickelson.

Spieth isn’t ready to call it an even matchup, considering Boy Wonder already has four major titles and arrived at Augusta looking to complete a career Grand Slam.

But this past week at Augusta sure turned it up a notch.

“He’s got four majors. That’s something I can still only dream about,” Spieth said. “I look forward to getting in the heat of the moment with him a couple of times in the near future and see if we can battle it out and test our games.”

McIlroy didn’t have a chance in this one.

The world’s top-ranked player was 10 shots behind going to the final round and realistic about his chances. A sluggish start doomed any hope of putting some heat on Spieth, though McIlroy did close with six birdies on his final 12 holes for a 6-under 66 that left him six shots behind.

It wasn’t all about youth.

At 44, Mickelson has clearly come up with a formula that should give him a few more chances to add to his five major titles. He’s largely blown off the regular PGA Tour, focusing all his energy on the majors. It worked at Muirfield in 2013, where he rallied to win the British Open. It led to runner-up finishes at the last two majors, even when his other results provided little evidence he was ready to contend.

Now, with McIlroy’s Grand Slam quest on hold for another year, the focus turns to Mickelson in June at the U.S. Open, where he will try to add the only title missing from his resume.

“I’ll be trying to get my game sharp heading into that week,” Mickelson said. “I’ll have a different tactic (than Augusta). I’ll try to play more of a controlled-style game, getting the ball in play, getting the short game sharp.”

Woods, whose game was such a mess just two months ago, re-emerged at Augusta and showed some of his old flair. The 39-year-old never seriously contended on the final day — and raised a few eyebrows when he claimed a “bone popped out” when he struck a tree root on a swing — but a 5-under 283 showed that he’s at least headed in the right direction.

Yep, the future of the game looks bright.

For both the short and long term.