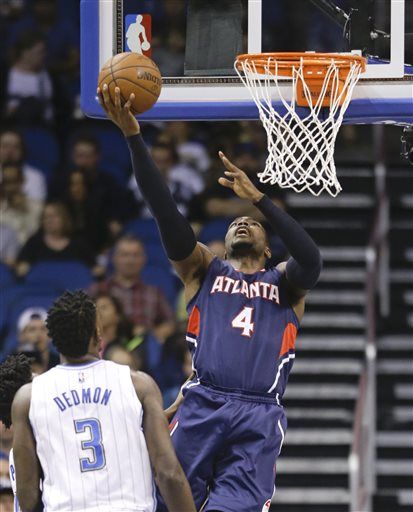 Hawks rally in 4th, down Magic 95-83 to end losing streak

ORLANDO, Fla. (AP) — The Atlanta Hawks want to do everything they can over their last dozen games to be as playoff-ready as possible.

They started by saying goodbye to their longest losing streak of the season.

Paul Millsap had 25 points and 11 rebounds, and the Hawks snapped a three-game losing streak with a 95-83 victory over the Orlando Magic on Wednesday night.

“We stuck with it,” Millsap said. “The shots weren’t falling early in the game. We didn’t let it get us down. We stayed with what we do, continued to move the ball and we started making shots.”

Jeff Teague added 16 points, despite spraining his left ankle in the first quarter.

The Hawks trailed by as many as 13 in the first half, but outscored the Magic 27-12 in the fourth quarter.

Atlanta entered the night shooting just over 41 percent against in three previous games this season against Orlando. The Hawks shot just 43 percent Wednesday, but held the Magic to two points and five turnovers in final five minutes.

Orlando had just five turnovers in the first half, but finished the night with 17, which led to 21 Hawks points.

The Magic lost their second straight and have dropped eight of their last nine.

Atlanta chipped away at the Magic’s lead for most of the second half and tied it in the opening seconds of the fourth quarter.

The Magic slinked back out to a seven-point advantage at 78-71, but that was soon reduced to 79-78 on a floater by DeMarre Carroll with 5:42 remaining.

Following a basket by Payton, the Hawks then took an 82-81 lead on back-to-back layups by Millsap and Teague.

The run continued thanks to some Magic turnovers, and Atlanta put the game way— 93-81 — on a 3-pointer by Teague with 1:55 left.

“The struggle in the fourth quarter, we weren’t getting enough stops to get out and run,” Magic coach James Borrego said. “That was our advantage offensively tonight.”

Budenholzer said before the game that he expected it to be a balancing act the rest of the regular season to keep his team playoff ready, and also get players rest.

It helps that swingman Thabo Sefolosha returned to action Wednesday after missing 23 games with a right calf strain.

“It was a big win for us just to get our confidence back,” Teague said. “We know we’re a good team. We just had to go out and play like one.”

Hawks G Kyle Korver, playing in his second game back from a broken nose, started the night wearing the same protective mask that seemed to bother him in the Hawks’ loss to San Antonio on Sunday.

He shed his plastic shield late in the second quarter against the Magic and kept it off the rest of the way. He finished with just 13 points on 5-of-12 shooting, but hit some big shots during the Hawks’ comeback.