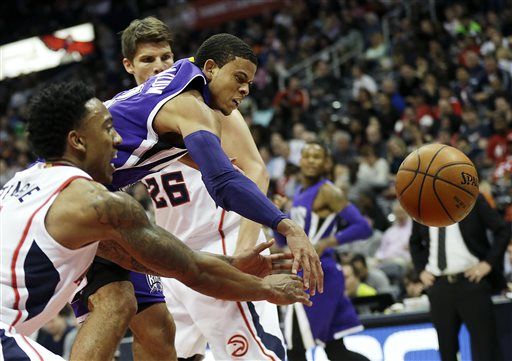 ATLANTA (AP) — The Hawks gave Kyle Korver the weekend off, hoping it would help him break out of his shooting slump.

Boy, did it ever.

And the rest of the team came along for the ride.

Korver and DeMarre Carroll each scored 20 points as Atlanta bounced back from a rare loss by becoming the first NBA team to 50 wins, scoring a season high in routing the Sacramento Kings 130-105 on March 9.

Resting Korver and two other starters, the East-leading Hawks (50-13) were beaten by the lowly 76ers over the weekend to snap a six-game winning streak.

Korver didn’t even make the trip to Philadelphia after going 17 of 54 from long range since the All-Star break, dropping him below 50 percent on the year. He didn’t pick up a basketball for two days, a jarring break in his routine.

All five Atlanta starters were in double figures, and Dennis Schroder chipped in with 12 off the bench. The Hawks made 53 of 88 (60 percent), taking advantage of one of the league’s worst defensive teams.

“We’ll pass up a good shot to get a great shot,” said Carroll, who scored all of his points in the first half, connecting on 4 of 6 from outside the stripe. “When you have guys that don’t care about the glory, this is the result.”

The Hawks led 76-54 at the break — their most prolific half of the season. They finished with 42 assists, best in the NBA this season and the most by the Hawks since 1993. Jeff Teague led the way with 13 assists, to go along with 18 points.

Rudy Gay scored 23 points as the Kings lost their fourth in a row.

The Hawks topped off the first half with Teague stealing the ball, driving toward the hoop, and somehow banking in a wild shot while Ray McCallum tried to put him in a bear hug. Teague missed the free throw to cap a three-point play, but not much else went wrong for Atlanta.

“They’re great. It’s fun to watch, tough to play against,” Gay said. “It’s textbook. It’s what every team wants to be.”

The Hawks eclipsed their previous season high for points, 127 in a victory over Cleveland on Dec. 17. The previous high for assists by any team was 41 by the Los Angeles Clippers against Brooklyn on Jan. 22.

“That’s a good accomplishment,” said Paul Millsap, who scored 13. “But the job’s not done.”

Kings: Carl Landry got the start in place of Jason Thompson. Coach George Karl said he was merely trying to get a look at more of his players and how they mesh together. … The Kings will host the Hawks next Monday. … The Kings surrendered a season high for points. They have given up more than 50 percent shooting by their opponents in the last four games. … DeMarcus Cousins was held to 12 points on 3-of-9 shooting, though he did grab 14 rebounds.

Hawks: Improved to 12-1 vs. Western Conference teams at Philips Arena. They next start a season-high, six-game road trip. … C Pero Antic missed his second straight game with a sprained left ankle. G Jarell Eddie, on a 10-day contract, also did not dress. … All five starters were in double figures for the 18th time this season. … The crowd of 18,418 was the 17th sellout in the last 20 home games, after the Hawks sold out only one of their first 14 games.

The Hawks got the 12th 50-win season in franchise history, their 10th since moving to Atlanta from St. Louis in 1968. The earliest the Hawks ever reached 50 wins on the calendar was Feb. 29, 1968, during their final season in St. Louis. It was their 73rd game, in an era when the season ended much earlier in the year.