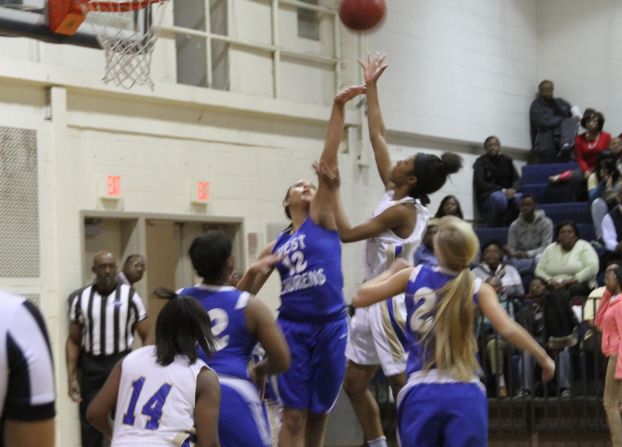 With the amount of skill that the Lady Panthers have shown on the court through the 2014-15 season, Americus-Sumter fans are sure to be thrilled as the the girls push their way further up the ranks in the tournament. With A’tyanna Gaulden’s ability to penetrate her opponents’ defenses and make a hole to the bucket combined with Timia Swanson’s penchant for converting rebounds, the Lady Panthers are sure to go far this year. Jy’kiera Long’s ability to hone in on the basket from beyond the arc coupled with the strong defensive tactics of Amber Hicks, Myia Crawford, and Jakala Stevenson will surely keep the Lady Panthers’ foes on their toes as the ASCHS girls claw their way to the top.

With Crawford, Stevenson, Hicks, Swanson, and Gaulden starting in the first-round match, the Lady Panthers hit the court ready to prove to the West Laurens girls that their sights are clearly set on the state championship. Swanson jumped for the tip-off and the Lady Panthers took first possession.

Swanson opened the scoring for the Lady Panthers twenty seconds in with a pair of free throws and West Laurens responded a minute later with a single shot from the charity stripe. The Lady Panthers then went on a 15-0 run over the next four minutes, sparked by Hicks, who drove the lane for a lay-up at the 6:50 mark. Gaulden and Hicks each contributed five points to the run while Swanson posted four before a Lady Raider shooter broke the team’s silence with a perimeter shot at 3:00. Long came off the bench to add a pair of buckets from the lane and Amia Sims drained two from the charity stripe to wrap up the first quarter for the Lady Panthers. Americus-Sumter took a 23-7 lead into the second frame.

Stevenson sank a lay-up two minutes into the second quarter before Long landed a long shot, assisted by Gaulden. Crawford then added a free throw to put the Lady Panthers ahead 28-11 with three minutes left in the half. Swanson laid up a trio of baskets, assisted by Hicks on one to give the Lady Panthers a 34-13 advantage at half-time.

Not to be outdone, the Lady Raiders came back strong in the second half, bringing a hard offensive push that would net the team 16 points in the third frame. The Lady Panthers matched them point-for-point to enter the final quarter up 50-29. Gaulden opened up the scoring for the Lady Panthers forty seconds into the second half, stealing the ball and making a fast break for a lay-up. She then went on to assist Swanson in another lay-up at the 5:30 mark. Stevenson quickly drained a three-pointer before Swanson posted another bucket and one. Gaulden added two more points with a lane-driven lay-up at the 4:30 mark to give the Lady Panthers 43. She then added a trio of free throws. With a minute left, Ariel West came off the bench to toss one in from beyond the arc before Hicks added one from the charity stripe to cap off the quarter’s score at 50.

The Lady Raiders had their most lucrative frame of the match in the fourth, posting 21 points and holding the Lady Panthers to only nine. Hicks first grabbed a rebound and laid it up before adding two foul shots. The Lady Raiders then went on an 8-0 run over the next two minutes to narrow the gap to 54-39. With five minutes left in the game, Shadajiah Johnson assisted Amber Stewart in a lay-up. Johnson then went on to nail a pair of shots from the free throw line and Crawford added another at 1:45 as the Lady Raiders steadily chiseled away at the team’s early lead. While the Lady Panthers burned up the final minute of clock time, Gaulden drew two fouls and rounded out the Lady Panthers’ final score of 59 from the charity stripe.

Swanson led the Lady Panthers in the match, putting 19 points on the board, pulling down seven rebounds, and contributing three steals. Gaulden followed close behind with 15 points, two steals, and two assists. Hicks contributed nine points and Stevenson gained a pair of steals. Long and West each drained a single three-pointer in the match. 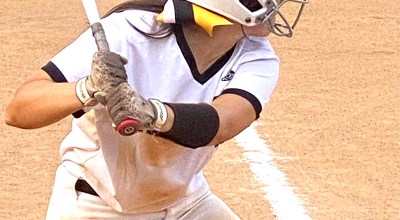