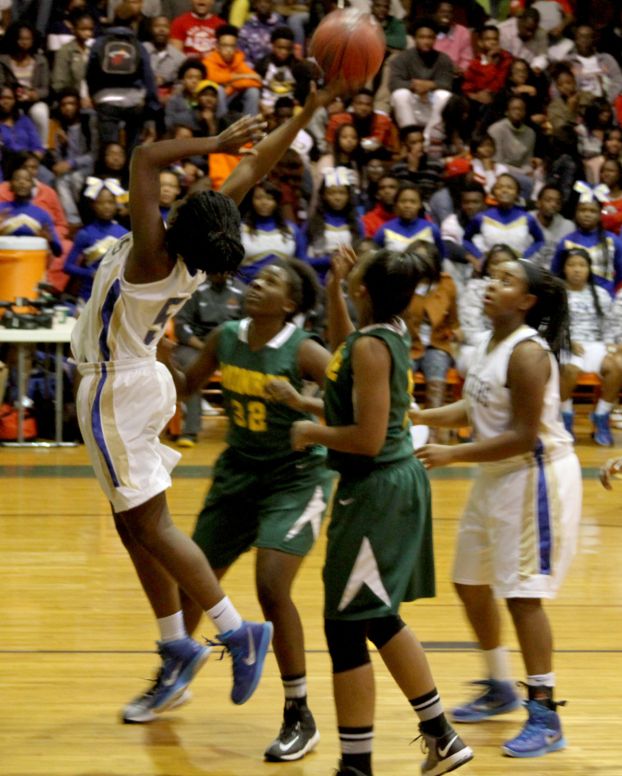 ALBANY – The Americus –Sumter Lady Panthers took the region championship on Feb. 13 with a thrilling 63-51 victory over the Monroe Lady Tornadoes in Albany. The Lady Panthers swept the region tournament, taking first place and improving their region record to 15-1 and overall record to 27-1. The win brings the team’s season of region play to a close as the Lady Panthers set their sights on the state title.

The fierce championship match started with both teams taking the court ready to battle for the coveted region title. A’tyanna Gaulden, Jakala Stevenson , Myia Crawford, Amber Hicks, and Timia Swanson started for the Lady Panthers with Swanson jumping for the tip-off. The Lady Panthers received the tip and Monroe quickly recovered the ball and opened the scoring 20 seconds in. Crawford put the Lady Panthers’ first points on the board with a lay-up a minute later. The Lady Tornadoes pulled ahead with a three-pointer soon after and began to build a seven-point advantage over the next three minutes.

At the 3:00 mark, Hicks cut into the deficit by driving the lane for a lay-up to narrow the gap to 8-13 before sinking a perimeter shot to add two more. A pair of lay-ups by Swanson tied the score 14-14 with one minute left in the quarter. Monroe sunk a free throw at the last second to take a 15-14 lead into the second frame.

The Lady Tornadoes’ lead would not last long, however, as Gaulden managed a steal early in the quarter and Stevenson promptly followed with a shot from beyond the arc to put the Lady Panthers ahead 17-15. Seconds later, Gaulden assisted Swanson in a lay-up before draining two more shots to give the Americus crew a 23-17 lead. The Lady Panthers added eight more points over the next five minutes to take a 31-26 lead into the locker room at the half.

Monroe made up some ground after the break, coming within one with a pair of lay-ups that brought the score to 31-30. At the 6:00 mark, a Monroe shooter drove the lane, barreling into Hicks and the Lady Panther starter fell to the floor. Americus fans waited with bated breath as the officials saw to her on the court. As she was escorted to the sidelines, Panther supporters couldn’t help but speculate on how losing a starting player might affect the game.

The Lady Tornadoes took advantage of the confusion, posting five points over the next minute and-a-half for a 35-31 lead. Swanson broke the Lady Panthers’ silence at the 4:20 mark with a Gaulden-assisted lay-up. Immediately after this play, Gaulden stole the ball and tied the score with a lay-up of her own.

ASCHS fans’ fears were quieted when the Lady Panthers then proceeded to go on a scoring rush, adding ten points through the rest of the quarter and only giving up two for a 45-37 lead entering the final stanza.

Jy’kiera Long opened the scoring for the Lady Panthers with a three-pointer assisted by Gaulden, sparking a11-7 run that lasted five minutes. At the 2:30 mark, Hicks, back in the game, stole the ball and launched it down court for Gaulden to lay-up. Gaulden then sank a pair of free throws to give the Lady Panthers their largest lead of the game, 61-46. Monroe scrambled to make up ground before the buzzer, but could not close the gap and the Lady Panthers took the 63-51 victory as well as the region title.

ASCHS powerhouse Gaulden led the Lady Panthers scorers with 21 points in the match. Swanson and Crawford joined her in the double figures with 13 and 10 points, respectively.