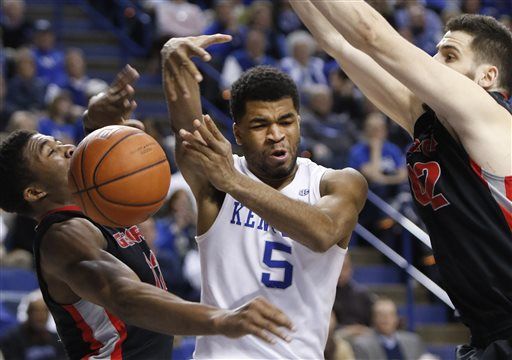 LEXINGTON, Ky. (AP) — Not long ago, Andrew Harrison hesitated to take the shots that are now falling for Kentucky’s sophomore point guard. Karl-Anthony Towns’ main issue recently has been finishing off his promising starts.

Both players’ determination to progress resulted in huge efforts that kept the top-ranked Wildcats unbeaten.

Harrison scored a season-high 23 points and combined with Towns for key baskets down the stretch that helped Kentucky stop pesky Georgia 69-58 on Feb. 3.

Twice on the verge of running away from a Georgia squad playing its second straight game without leading scorer and rebounder Marcus Thornton (concussion), the Wildcats (22-0, 9-0 Southeastern Conference) saw their margin dwindle near the end.

Harrison and Towns quickly asserted themselves to preserve the Wildcats’ lead.

Harrison’s layup with 3:58 remaining provided a 62-54 lead before baskets by Yante Maten and Nemanja Djurisic pulled the Bulldogs to 63-58 with 2:06 left. Towns’ short jumper with 1:33 left got the lead to seven, and Tyler Ulis and Harrison each added two free throws in the final minute for the Wildcats.

Towns finished with 15 with a career-high 13 rebounds.

Those performances were big for both players beyond the outcome. For the oft-scrutinized Harrison, it demonstrated a growing confidence in his game that resulted in 8-of-16 shooting including three 3-pointers, seven of Kentucky’s 16 assists with just one turnover.

“I’ve been putting a lot of work in with my dad and the assistant coaches,” Harrison said. “It’s a blessing to play well.”

Added Kentucky coach John Calipari, “we’re trying to get him to be more aggressive. There were a couple of plays early in the game I said, ‘quit pulling it out. If they throw it to you, attack, make plays and make plays for your teammate.’…

“I thought he played with good energy. Assist-to-turnover, he played well.”

Djurisic’s 17 points led Georgia (14-7, 5-4), which outrebounded Kentucky 36-24. Maten added 13 points and nine rebounds for the Bulldogs, whose nine offensive boards helped them stay nearly even in the paint against the taller Wildcats.

But Georgia couldn’t get the rebounds it needed in the final minutes while Kentucky did. Willie Cauley-Stein came up with one leading to Harrison’s clinching foul shots, and Towns sealed the game with a block and rebound at the end.

“If we make another shot or two late, it could have been interesting,” Georgia coach Mark Fox said. “Kentucky’s got a great team and give them credit for making enough plays to win.”

Devin Booker had nine points and Ulis eight for Kentucky, which played its second straight game without freshman forward Trey Lyles because of an illness. While his absence hurt the Wildcats, Towns more than made up for it with two good halves after struggling to finish off strong starts.

“I’m just trying to put a lot of things together, and I see it’s working,” Towns said after shooting 6 of 11 from the field. “I’m making a lot of shots right now, and that’s a testament to hard work.”

Towns and Harrison combined to shoot 9 of 16 from the field for 23 first-half points, including 10 down the stretch to provide a 42-27 halftime lead just when the Bulldogs were making it competitive.

Georgia eventually trailed by 18 early in the second half before drawing to 51-42 with a 15-7 run over 4:04. The Bulldogs didn’t go away and had chances near the end but couldn’t get closer than five in the final minutes.

Harrison and Towns made sure of that.

“Let’s get in the game like the Super Bowl where you got to catch one on your back. I promise I’ll run it in if you get us to that point.” — Calipari, who drew a laugh with an answer referencing the end of Sunday’s Super Bowl where Seattle was criticized for passing the ball on the 1 (which was intercepted) instead of running it in.

Kentucky: Among the spectators was Hall of Famer Oscar Robertson, who mingled with College Basketball Hall of Famer and former Wildcats coach Joe B. Hall. … Towns and Cauley-Stein (6 points, 5 rebounds) combined for all 10 of Kentucky’s first-half rebounds.